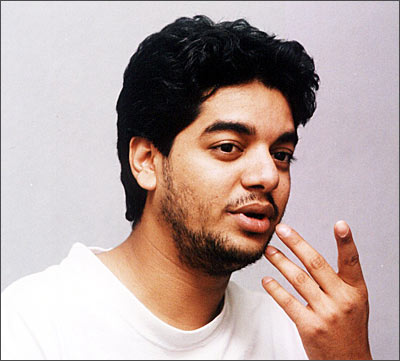 I studied with Shaad Ali in Standard 8. We were in Srinagar [Images] then (1998-1999). His father (Muzaffar Ali, who directed Umrao Jaan [Images]) was shooting for a film called Zooni, starring Dimple Kapadia [Images], in Kashmir.

Since the shoot was a long one, Shaad had joined him there. He would sit behind me as we were made to sit in alphabetical order of our first names.

He was a very cultured and good-looking guy and we all thought that, with his father being a noted director, he would eventually become a Bollywood hero. We used to ask him to sign autographs for us, so that we could show them off when he became famous later!

Anyway, Zooni never got completed and Shaad left school. We lost touch after that.

I was thrilled when I came to know that he was the director of Saathiya [Images]. I instantly recognised him when I saw an interview of his.

He was a thorough gentleman, very soft-spoken with no airs about him. I wish him all the best in all his ventures.