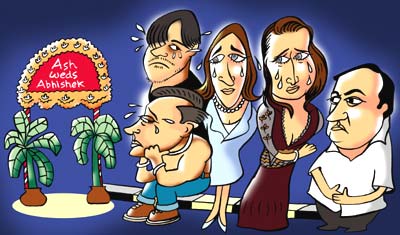 While the tabloids rack their brains about who in Bollywood merits an invite to the Aishwarya-Abhishek wedding on April 20, here's our take on some who may not be at that particular Friday night blast.

No surprises for guessing shirtless wonder Salman Khan won't be a part of the baraat -- so what if dad Salim's partly responsible for Amitabh being the Big B -- while now quite unseen actor Viveik Oberoi won't make it either.

But Ash's exes won't be the only ones feeling left out.

Abhishek's former fiancee Karisma Kapoor isn't likely to shake a leg for the new couple, and sis Kareena won't be rocking the party either.

And then, on far right, we see Mukesh Ambani, the Reliance supremo who has chosen Brand SRK over Brand Bachchan. Younger brother Anil Ambani, of course, is one of Amitabh's closest friends.