This Sunday, she has a special guest: Jackie Chan [Images].

In this show, this martial art expert talks about himself, his rise to fame, marriage and what he's really scared of.

rediff.com offers you a look at what to expect on the show.

Rendezvous With Simi Garewal will be aired on September 3 at 9:30 pm on Star World.

Simi: Your early childhood has become the stuff of legends. Right from the time when you were born.

Jackie: I was born in a poor family. My mum carried me for 12 months. When I was born, I was 12 and a half pounds. Big baby! Giant baby! My parents did not have enough money to pay the bill.

Simi: Because she had to have a caesarian operation.

Jackie: Yes. Am talking about 50 years ago. Those were big... big things for us. They were going to sell me to a British doctor.

Simi: So is it true that they had no money to pay for you so they were going to sell you?

Jackie: Yes! The doctor said. "Ok I want the baby! I'll give you $120 then I'll pay the bill." A friend of my father said, "Charlie... No! That's your only son. If you sell him, you might not have another one. Don't do that" We borrowed money from our friends, so everyone gave $10, $10 and they paid the bill.

Simi: Tell me, what about the biggest film industry in the world -- Bollywood?

Jackie: Yes, Bollywood I think really surprised me. I see so many people going and seeing Bollywood movies.

Simi: Have you seen any Bollywood movies?

Simi: Which ones have you seen?

Jackie: I can't remember, I just know, Indian movies always singing... 3 hours to 4 hours. What are they doing? What are they speaking? Why dancing again? Why singing? But today, the dancing compared to 30 years ago, the movement, the technology, wow and choreograph the dancing, it's just amazing �

Simi: What do you think about the stunts?

Jackie: I think a lot of things are learnt from us ..

Jackie: Ya, but now, everybody learns from everybody.. 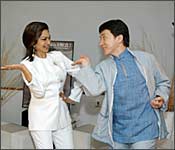 Simi: Why don't you make a film in Bollywood?

Simi: Jackie, can you imagine if you made a film in Bollywood look at the audience you would have?

Simi: Plus, the rest of the world

My dream is on... becoming a stunt coordinator. That's why I'm learning hard to learning a camera angle, camera movement and luckily becoming a small star after Bruce Lee died. Just small star. At that time there was so many Bruce chair, Bruce table... everybody... In my poster�second! Bruce Lee... Jackie Chan... Starring!

(Chan made 27 movies but nothing worked. Every film he acted in flopped. He was becoming box office poison)

At that time what can I do. Directors were big directors! "Sit down, move your nose!" Can I move my mouth? "No!" They won't listen! Can I do this? (makes a facial expression) "No! You have to do this! Like Bruce Lee!" You know� I said "No! I'm not Bruce Lee." They never listened.

Simi: But how did you change that?

Jackie: When I met another director then I said I want to do action comedy. I want to do the opposite of Bruce Lee!

Jackie: When Bruce Lee does this (punches aggressively), I would do the opposite. The director said, "Oh okay! Let's do comedy!"

Jackie: That's great! I wrote my own and then boom! Success!

(When he turned Kung Fu into slapstick, the classic Jackie Chan movie was born. In 1978, Jackie Chan became a star! He was 24.)

Simi: How many broken bones did stardom cost you?

Jackie: Too many! Cannot count. All over! I haven't counted the operations. At that time I used to think that was the only way to make a movie.

Simi: That time with success your stunts got more and more dangerous. A jump from the 16th floor, you thought. "No! It's too predictable, let's make it 21!  Why! Mmm... lets hang from a flying helicopter." Why was that necessary?

Simi: Why didn't you use computer graphics?

Jackie: I don't know how to do computer graphics. I don't have the knowledge in my head. I felt that's the only way to make a movie. Before I don't know. But now I know. Put the camera. Don't move. I do the hit then I go. Second shot, get the car.. Stop here... Then combine together. Boom! Same thing! It's more dangerous... The audience do 'wow' and that time, everybody was scared I might kill myself... 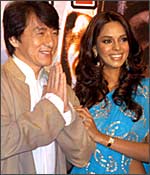 Simi: So many times, you nearly killed yourself. Why?

Jackie: That's the only way I know how to make movie. I jump once okay! Director would say, 'Ok good shot!' Every time there was just one shot. When we're doing a stunt, there's no second take.

Jackie: When I was in Hollywood, first time I saw Steven Spielberg [Images]... I just admire him. I think he's a genius. I tell can you tell me how to make the dinosaur? Small dinosaur? Humans? The mountains? Jumping and then talking? He said, "Oh so easy, Jackie. Just press a button. Then he said, 'Jackie can I ask you. How you make that jump from the building.' I said, 'Rolling. Action. Jump! Cut! Ouch! Hospital! Easy, right?' That's the conversation with Steven Spielberg!

Simi: But I still want to know. Were you living up to people's expectations of you, Jackie?

Simi: Tell me did you feel people expect this from you now?

Jackie: Even I expect this from myself, not just for the audience. No mattress, no safety net, nothing. We go into the glasses (Powww!)

Simi: Well no insurance company is ready to insure you!

Simi: So you pay for everyone's treatment?

Jackie: Yeah! You hurt in my movie? I'll take care of you my whole life. That's my promise.

Simi: Tell me Jackie, which would you say is the most difficult stunt you have done, which you were terrified of?

Jackie: Look, am an ordinary man! Am not superman! Really! I just... I just... shows enough. I'm scared. I have to do it. There are so many people watching it... for the movie... for myself� for the fans.. for the world.

Simi: And in real life are you scared of anything?

Simi: Needle? You're scared of needles? Why?

Jackie: I don't know why. I think from childhood. My father, I remember, I'll never forget... I got my first injection in my butt�

Simi: To jump from a building doesn't hurt?

Jackie: No! Even when I broke my ankle, the doctor had to operate. I said, 'No, just do it. No injection.'

Simi: But when you cut yourself and hurt yourself then?

Jackie: Okay, when I cut this I can see my teeth, I just do this (joins upper lip).

Simi: You join it yourself?

Jackie: AB+. So my blood is very strong! Even when I cut my upperlip, I just hold it together and then back to camera... action.

Jackie: Yes. It seals! Even the doctor says... Wow! This man is a superman!

(By 1985, Jackie Chan had become the biggest star in Asia. His persona was always on public display for the world to see. It was his private life, his loves, his women, his marriage that remained a mystery.)

Simi: In 1980, you were already successful, rich, young, right on top of the world

Jackie: Young, rich, famous, wherever I go, special, the stunt men with me -- six of them -- almost like a gangster. No education, wearing a diamond watch... anything. (Do) whatever I want.

Jackie: She had the baby. Then, I said, 'Wow you have my baby. That's my responsibility. Then, because when we go out the first day, the newspaper: 'Jackie has new girlfriend.' 2 crore sue in Japan [Images]. After sue, my company said you cannot sue anymore. You have to hide. I have to go away.

Jackie: She went to Los Angeles. Not because of American citizen. No, no, we are hiding from the paparazzi. That's all. She is hiding, the baby comes out. What can I do? Can we marry? I don't want to marry. I am a bad boy. Then okay, she said, 'I don't want the baby having no father.' Okay, then I sign a paper. Today, I get married. Next day, the baby comes out. Then, bye bye. Then, I go back. Come back to Hong Kong... the movies continue. I don't care anymore. That's me. But all these years, I am learning. Yes, I am wrong. I did something wrong. But now, I am good father.

Simi: Because your manager and friend Willie Chang said you make a very good friend but a very bad husband?

Jackie: Ya, I am a very bad husband. I think at the time being now I am getting older, I don't go out every night. Now, I have changed.

Simi: But in the world of Jackie Chan, what room is there for family, love, for marriage?

Jackie: The family is already there. Even my wife, my son if they want something, do something, they don't call me. They call the manager, they call the assistant. So never care about family, I am still concentrating on business. Today, if I quit, bye bye everything.

Jackie: Because I am very lucky becoming a Jackie Chan. Really.

(From stuntmen to superstar, popstar, fund raiser, philanthropist, Jackie has gone beyond the realm of fame to become a global icon -- an icon that has a spawned a giant industry all over the world. And as the achievements, awards, honours  multiplied, the legend grew, and so did Jackie. From that young boy who lived on charity.)

Simi: Forbes magazine has named you among the biggest charity givers in the world, along with Oprah, Anjelina Jolie and Sunny Bono. I want to ask you for a boy who grew up hungry and who made his fortune literally by breaking his bones. How easy is it for you to give charity?

Jackie: Pretty easy. Right now, I am learning. When I am doing charity, I am learning how to do it. When I first got a million, I am the king. I am the king of the world. That time I bought diamond watches, sports car, everything. But after I learnt so many things from so many people, now, it comes back. I was so poor when I was a child. So many people helped me. People sent me food. Who are they, I don't know. Now, I have to return to the society.

So I started a foundation in Hong Kong. Last year, I built 11 schools in China. This year, I will build another two schools. I will continue to do all things. Not for fame, now I am really doing it from the heart.

Simi: Do you feel you could have done more in your life?

Simi: Could you have loved more in your life?

Simi: Well, anyway, I think for a boy who was born in poverty, who wasn't considered a great looker in that sense of the word, who didn't learn how to read and write, I think, you have come a very long way Jackie. And, that's the magic of the movies, isn't it?

Jackie: Ya, ya, movies really helped me. Now, I really want to help children around the world.

Rendezvous With Simi Garewal will be aired on September 3 at 9:30 pm on Star World.