It is Don -- and even as the 1978 Amitabh-starrer directed by Chandra Barot airs on television screens and flies off store shelves, the 2006 version starring Shah Rukh Khan [Images] and directed by Farhan Akhtar counts down to release.

Naysayers continue to berate the film and to suggest that imagining any Don other than Amitabh [Images] is blasphemy; meanwhile, an entire generation born after the cult classic hit the screen queues up in theatres, and logs on to the net, for advance bookings.

"I'm not the torchbearer of the remake brigade," Akthar says -- but his decision to remake the classic film has sparked a slew of remakes that threaten to become the next big Bollywood trend.

Farhan sat down with dad Javed Akhtar -- who wrote the original film with Salim Khan -- at the latter's Juhu home; together, they revisited the old Don and unraveled the new.

In a living room scattered with high art, and facing French windows that open onto a sea view to die for, the cult-creating father and maverick son talk Prem Panicker and Raja Sen through their respective films, their creative impulses.

The first of a three-part interview:

Farhan, you started with a light, preppy film on friendship; then you made a coming of age, redemption-type film against the backdrop of war. Now you are remaking an iconic film about gangs and gangsters. What is the common creative thread, the identifiable signature that runs through your creativity?

Farhan: I would credit it to some kind of creative instinct that makes me move on to whatever it is that comes next, with the gusto I bring to it. But I think that probably what you could see as similar between the three is that all of them are films that have been made one way or the other, in the popular genre, before I made them.

I think what they have in common is a different, individual take from what you would normally associate with that kind of film.

So is it a case of you coming across a storyline that has been dealt with in a particular fashion, being dissatisfied with the treatment, thinking if you had done this, you would have done it differently -- and then following through on that impulse?

Farhan: No, it is not dissatisfaction. It is more the excitement of getting a chance to do it the way you want to. There is no dissatisfaction -- I love movies, I've seen so many movies, like Don, for example -- there is nothing wrong with the original, it is fantastic the way it is, and that is exactly why I am so excited to remake it.

Of all Javed-saab's iconic creations, why was Don the film that jumped out at you and said, remake me?

Farhan: I think Don is the one film from that time that in my mind lends itself to being remade today. For me, it is a film that back then was a little ahead of its time. I don't say so technically -- not the way it was shot, or the sets, or whatever. But the way the story was told, the language the characters spoke, the writing style there was, it was very modern even for its time. So today, when you adapt it, it fits very easily into a contemporary space. 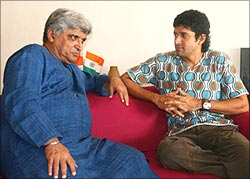 Javed-saab, if you were picking a movie of yours to be remade, would it have been Don?

Javed: Perhaps not. I see what Farhan's point is, and it is totally valid, it is a good point. But if I had to chose from my own films, I would pick one that after writing it and after watching it on screen, I felt oh god, I should have done this or that. So I would like to remake it, rewrite it to mend that mistake.

As a writer I don't have a problem with Don, so why would I want to remake it?

So which movie would you have remade?

Javed: Kaala Patthar, Arjun, Mashaal, Aakhri Jung -- these were the films I would like to remake because I feel they were very good films; they were very good plots, they were very interesting characters. But somewhere, I missed the bus as a writer, especially in the second half. The mistakes were minor, but it could have been corrected.

If I had taken one avenue instead of another, those films could have been much better.

Don is a totemic movie, an iconic character. We've all seen the film, we have at the time tried to walk like Don, talk like Don, copy the whole Don cool. In that sense, a lot of us have an indelible reference point with that film. Is that a potential problem for your re-imagining?

For me, the excitement of remaking it was a fan's excitement; that is how I wanted to approach this. All of us have such mental lists, points of reference -- so when someone sees the film, he has to go thank god, that bit that I loved in the original is there.

So I made that list. And then I tried to weave the story around that. While doing that, there were things that weren't fitting into the narrative, so I had to sacrifice those. So the upshot was, when you see the movie, you realize it is more a fan's take on the film, rather than a filmmaker's.

And then -- this is the second answer I mentioned -- you realise after seeing the film that your point of reference for Don, the character, is not going to be applicable to this Don, because this is a different character. He may say the same lines, but he is not the same Don.

Whoever has seen the movie -- with the exception of Pa, who is sitting right here and who is so very close to the film -- has not mentioned the earlier Don to me. No one has come to me and said this was better or that was better; Shah Rukh was better or Mr Bachchan was better.

Those who have seen the movie have only spoken about the film, because by the end it is a completely different film, so you forget to compare -- actually, you don't have a need to compare. You come out without thinking of the original movie -- in that sense, your point of reference has changed. You don't get into comparison, because they are two different movies that happen to begin with a common premise.

Don't forget to read the next instalment of this fascinating conversation with Farhan and Javed Akhtar tomorrow!