Have they, or haven't they?

Rumours about Aishwarya Rai [Images] and Abhishek Bachchan [Images] have gone into overdrive ever since they were seen together at a temple in Varanasi on Monday, November 27. And reports say they were seen taking part in a puja usually done by married couples.

The phenomenon has captured front-page imagination across the country, dominating news channel and keeping tongues wagging, and the buildup is too enormous to be ignored. Therefore, in the tradition of Brangelina and TomKat, we at rediff.com decided to christen these two superstars Abhiwariya.

And here's a quick look at the Abhiwariya saga:

June 2005: The two were spotted at the International Indian Film Academy awards in Amsterdam, where they danced to their hit number Kajra Re from Bunty Aur Babli [Images] together. Amitabh Bachchan [Images] also performed with them.

February 2006: The first serious marriage rumour was sparked off when Big B's [Images] brother Ajitabh Bachchan reportedly met Bangalore-based astrologer Chandrashekar Swami to discuss the horoscopes of both the stars.

In the same month, Abhishek also went to Sandipani Ashram in Porbandar, Gujarat, to seek the blessings of Guru Ramesh Oza. Oza is the founder of the Sandipani Vidyaniketan school. One of his followers is industrialist Anil Ambani, who is reportedly close to the Bachchans.

October 2006: During the shooting of Mani Ratnam's film Guru, the rumour mills were abuzz that Ash and Abhishek had gone to the Madurai Meenakshi temple to seek blessings. Some rumours also said they had got married. No such thing was confirmed. 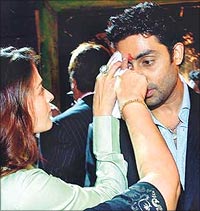 In late October, Bachchan family astrologer Chandrashekhar Swami told a Kannada newspaper that Ash and Abhishek were likely to tie the knot in 2007.

The rumour mills were provided more fodder when during the same time the duo went to watch a movie at one of the local theatres, and security guards prevented star-struck fans from getting anywhere near them.

November 2006: Abhishek skipped the Umrao Jaan press conference. Ash, on the other hand, spoke to the press but avoided all questions about her personal life. Instead, she said, "It is the audiences' love and concern. 'Whom is she going to be with in life? Whom will she marry?' The audiences feel I am part of their life, so they worry about me. I think that is very sweet of them and I tell them that when I will marry, I will announce it. When I get married, you'll know."

November 2006: Three days after Ash and Abhishek's Dhoom:2 released to full houses, the two offered prayers at the Sankat Mochan temple in Varanasi.

But are Abhiwarya really a couple? Your guess is as good as ours.