Director Sanjay Gadhvi is all set for his biggest Friday ever. In the first part of an exclusive interview with Komal Mehta, Gadhvi discusses making a bigger, more expensive film, and choosing Hrithik Roshan. Excerpts:

How difficult it is to make a sequel?

Dhoom was a hit for many reasons, and a lot of risks taken fell on the safe side of the fence. Everything clicked. One of the main reasons was the fact that nobody knew what to expect from the movie.

This time, there are big expectations. It's definitely more expensive, and bigger. We'll soon know if it's better. Everyone making a sequel -- from Krrish [Images] to Lage Raho Munna Bhai -- must have faced difficulties living up to the first success. But I think we've risen to the challenge. Let's hope for the best. (Crosses fingers)

Dhoom began this whole biking craze. What do you expect the audience to take away from this film?

We just hope the audience comes out entertained. Dhoom means 'blast'. We just want everyone to come and have a blast, so come see Dhoom 2 [Images] and have a bigger blast. It's like what Uday said the other day, 'Dhoom 2 is Dhoom times 2.' Everything is double and twice the fun.

And you've got Hrithik, Ash and Bips. I don't want to saw what the audience should take out of it but as long as you get entertained, don't look too deeply into it, don't look for the most meaningful cinema, don't look for a pathbreaking script... It's just a rollercoaster ride which, if you enjoy once, you should watch two-three times mores. 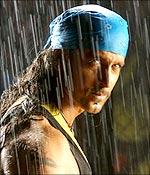 The highlight of the film seems to be Hrithik as the villain. Who decided this, you or Aditya Chopra?

It was a joint decision. I think where anything creative is concerned, Adi, being a director himself, gives all his directors enough space. He understands and looks at things from their point of view. But the fact remains that he himself is very talented and there is a lot of teamwork in Yash Raj film.

I told Adi that we need a big star to make the sequel financially viable. No one will see Dhoom 2 with a newcomer. So the choice boiled down to Shah Rukh Khan [Images], Salman Khan [Images], Aamir Khan [Images] or Hrithik. When asked for my opinion, I said Hrithik because he is the youngest of the four.

We thought we'd like to keep the youth factor going. And Abhishek, Uday and Hrithik are old buddies and somewhat of the same age. So Hrithik was our number one choice.

And obviously knowing what we could do with a bad guy in Dhoom and already having cast John Abraham [Images] in a negative role, it was challenging for us. We knew Hrithik would be definitely tempted to do it and won't say no.

Tell me something about the new characters in the film.

Hrithik is the bad guy, the thief. He's stylish, super-cool, he is hot and the women are going to like him a lot. He's daring, and probably all those things that you want in a hero except that he is on the wrong side of the law.

Ash is playing a character with negative shades, and somewhere down the line they might just team up together.

Bipasha is playing a tough cop, who talks a lot.

So in a nutshell, Uday (who is also a cop now), Abhishek and Bipasha are cops, and Hrithik and Aishwarya are robbers. And it's a cops and robbers story.

Is Rimii Sen in the movie? Or is her character now out of Jai Dixit's (Abhishek Bachchan) life?

Would you have cast Uday Chopra if this wasn't a Yash Raj franchise?

Well, there weren't so many choices, if you ask me. I think Arshad Warsi [Images] has come into his own now but Dhoom was made before Munna Bhai had started. Uday and I had worked together in the past, and both of us had discovered the flair for comedy in each other: Mere Yaar Ki Shaadi Hai turned out to be funnier than predicted because of Uday and my sense of humour. We connected while making the movie, so I knew it would be a good move to have Uday in my film again.

Uday is tremendously sharp witted. His repartee is bang on and he's a cool guy. So the moment the three characters of Dhoom were written, I automatically started visualising Uday in the Ali role. 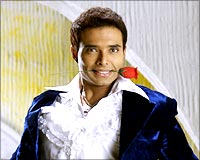 I think what Ali's character does to the film and what Uday does to the character of Ali is the backbone of Dhoom. If were to take out Ali from Dhoom, the film would fall flat because we would just have had John and Abhishek, the good guy and the bad guy. It would have one note missing.

Ali is the backbone of the film, with the relief he gives you. He plays it so sincerely and so well that it is difficult to think of anyone else playing it. You'd think there was no other actor who could have done this. And believe me, he not an out and out tapori. As a performance, he has created his own unique tapori.

There's no one you'll see who is like Ali's character. Yes, in parts, he is Rangeela [Images] ka Munna, Tezaab ka Munna, Munna Bhai ka Munna but he has a certain hipness. Ali shops at (Mumbai's) Hera Panna, he speaks English, he lives in Bandra, he's a cool biker, and he's a lover-boy.

Don't miss: Part II of the Sanjay Gadhvi interview, where the director talks about Dhoom 3.