Mostly everyone seems to be warming up to rookie Daniel Craig, his near-flawless Casino Royale performance merely an indicator of things to come. But as always, when a new 007 surfaces, fans of the franchise begin to debate over which of his predecessors was the finest.

Actually, make that second-finest. Everyone agrees that Sean Connery [Images] is James Bond [Images], his avatar proving to be such a compelling character that even writer Ian Fleming changed 007's parentage to reflect Connery's Scottish background in subsequent novels. Ever since 1962's Dr No, Connery and Bond go together like Aston Martins and martinis.

As for second place, the race is wide open. Even as Craig deservedly joins the fray, Roger Moore and Pierce Brosnan [Images] are the popular names. Mostly everyone shies away from George Lazenby's foray into MI-6, but the injustice lies in how Timothy Dalton, possibly the purest of all Bonds, remains criminally overlooked.

All right, I heard the outrage. But hear me out this time before scrolling rapidly down to leave a comment. Am I a Bond purist? It's hard to say. 007 fanatics can be those obsessing unrealistically over book-to-screen detail in a franchise that left the books alone eons ago; they can also be those meticulously quoting the most insane innuendo and little continuity errors. I'm neither, really. I cherish a collection of tattered Pan versions of the Bond novels, and, having seen each of the 20 films at least twice, can hold my own in a Bondgirl quiz. I love the books and the movies, realise how very different they are, and am admittedly far too traditional -- just like James Bond has always been.

And before we go on to talk about Timmy, let's quickly skim through the others, yes? Connery is The Man, a fact we all know and can't possibly even debate. His 007 blended style, seduction and ruthlessness in an iconic fashion that made us all stand before our mirrors, folding fingers into Berettas.

George Lazenby managed a couple of scenes well in On Her Majesty's Secret Service, but was woefully miscast in a film with a cracking second half that could really have done with Sean. In totality, George was a blunder.

Moore was fabulous as an aristocrat, but honestly far too soft to ever be taken seriously as Bond. After two initial good films, he seemed to stop trying, playing to the gadget-loving galleries and for laughs. No one could carry off the outrageous lines Rog did, handsome enough to carry a lot off with a wink, but he outlasted his welcome completely, always more smirk than superspy.

Brosnan was a tragic joke. Too old when he began playing 007, the Remington Steele actor found himself in precariously politically correct territory. Trapped in the worse-written of all 007 plots, Pierce tried valiantly but was overshadowed by a Mission: Impossible like set of insubstantial films. There was no subtext, he played the part too straight, and was always an attractive actor trying to play Bond. His films took the series to their most forgettable low -- some of the awful earlier films are memorable because of sheer cheese. Brosnan, too internationalised to even be the one Brit we all loved, was unforgivably blah. 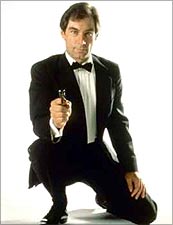 Now, to Dalton. By the time he got his turn as Bond, Rog had already reduced the character to a comic detective with his arching eyebrow as his greatest mission. The plots had gotten consistently ridiculous, and the time had come for the franchise to reinvent itself. In 1987's The Living Daylights, audiences were stunned to discover a very different James Bond. Truer than any to Ian Fleming's pages, Dalton's Bond was darker, more brooding, and his humour was wry. The film was a smash success, not only outgrossing Moore's last couple of films, but also topping American action blockbusters Die Hard and Lethal Weapon.

Bond fans, however, were confused. Growing up with the warm and cheeky Moore films and blatantly unfamiliar with the Fleming books, this gritty 007 didn't seem quite as right. Dalton's Bond could be cruel and callous, world-weary and a thinker, archaic and bleeding -- not just another superhero in a bowtie, with a fondness for double-entendre. He quipped, sure, but Dalton delivered his punchlines deadpan, as you'd expect from a tough guy.

His humour isn't usually as over-the-top, but only Connery could be that exaggerated as well as credible. Dalton brought considerable depth to the role, and while Rog fans might accuse him of lacking charm, it was just because he wasn't as overt. Don't believe the 'boring' tag till you see the athletic, rugged Dalton at work. 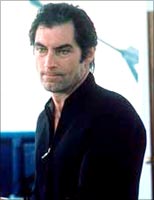 License To Kill is a Bond flop, and that's a shame. The film is James Bond redux, a lean and intense action thriller with lesser fat than 007 fans are used to. It isn't ridiculously about one man saving the world, it doesn't have a repetitive plot, and it's a complete back-to-basics film. Dalton is tough, dramatic and fiercely 007.

Back in 1989, a film where Bond quits the service was unthinkable. It's a film that defied the franchise valiantly, but was ahead of its time. Critics called it too renegade, and not Bond enough. But as a character, it's strikingly true to James. Watched today, in an age where even the Caped Crusader and the Dark Knight are going raw, it's a refreshingly fine and most underrated watch.

We all have our favourite Bonds. All us true believers swear by Connery, while some can't get over Roger, and a few even inexplicably manage to stand Pierce. What hurts, however, is that Dalton is almost always ignored by default. Most of those who balk at his very mention haven't even seen his films. Give him a fair chance, before writing him off.

All I ask is that you watch (or rewatch) his films, and rejoice in some fine Bondage.