In this reviewer's humble opinion, there is a fine line between having your own sound and being repetitive.

A R Rahman is one of the few music directors in Bollywood -- or for that matter anywhere -- who can tread that line with �lan.

And the soundtrack of Guru -- Mani Ratnam's upcoming film which features a Abhishek Bachchan [Images], Aishwarya Rai [Images], Madhavan [Images], Mithun Chakraborty and Mallika Sherawat [Images] -- has A R Rahman written all over it in all caps.

Guru is generating buzz for a number of reasons. It is rumoured to be inspired by the villager to tycoon story of Dhirubhai Ambani. And the movie sees Rahman reunite with Ratnam, a duo that has given us memorable soundtracks like Roja [Images].

The album of Guru kicks off with Barso Re, a peppy rain song sung by Shreya Ghosal and Uday Mazumdar. It is sparse, 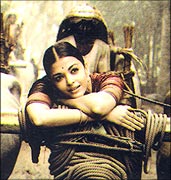 Rahman style, and injected with intelligent loops and percussion staccatos. But it does not tug at your heart-strings.

Which cannot be said about Tere Bina. This is Rahman at what he does best: ballads. The heart-warming song also bears testimony to the fact that the composer has evolved from a shy singer to a confident vocalist, never mind that his voice is not what most experts will go ga ga over. Tere Bina -- marked as a tribute to Nusrat Fateh Ali Khan -- is one of the two best songs of Guru.

Next up is Ek Lo Ek Muft, a bhang number sung by none other than Bappi Lahiri. His accent almost disguised, Bappida seems to be enjoying the song, which sounds like a tribal chant at times. So-so, is the verdict.

Then comes Ms Sherawat's belly dance moment. Mayya, with its sensual sibilance and speaker-phone vocals, is very Middle Eastern. The singer's accent is a bit of a put off but I don't think anyone will be bothering about her accent with Ms Sherawat's accentuated curves hugging the screen.

Track number five is Ay Hairathe, sung nicely by Hariharan [Images] and Alka Yagnik. The smooth transition from what is almost a ghazal to a Scottish highland interlude and back demonstrates the composer's ease with both Western and Eastern music.

Up next is the techno-beat-meets-Udit Narayan's-voice offering called Baazi Laga. A tad pedestrian, but you never know with the right moves on screen.

The finale is the goose-flesh moment, undoubtedly the best song of the seven-number soundtrack, Jaage Hain. The orchestra rises and the strings swell to conjure up visions of a great beyond. A song full of cinematic promise.

The bottom line: If you want an album to play at a party, give Guru a miss. If you want to ponder over life's deeper questions and listen to music that tugs at your heart, buy it just for Tere Bina and Jaage Hain.