We've missed you, we have. You might have officially been around these last few years, sir, but television detectives never quite did the job right. Once again, you look like a man ruthless enough to maim without mercy and suave enough to order a martini so complicated the rest of the table wants one instantly.

Yes, the big question is all about Daniel Craig [Images]. And all fears are put to rest. Craig is a very solid James Bond [Images] indeed. And while this is a film bogged down by pretty serious issues, it's still the best double-o-movie since 1989's License To Kill.

Ian Fleming wrote Casino Royale in a few weeks, apparently based on his own experiences gambling with Nazis. According to the author's account, known Nazis were on the premises at a Lisbon casino and he felt he should dent Hitler's [Images] funds by winning their money. Ian, minus the martinis and delicious treasury agent, lost the game.

But the author made sure James (in possibly the shortest Bond novel) wins big. The plot is a trifle simplistic, about international terrorist banker Le Chiffre (Mads Mikkelsen) playing a high-stakes poker game, and using the money to fund terrorist activity. Bond, roguish cardshark that he is, comes in to wipe him out -- it's always fun betting with money from Her Majesty's coffers. 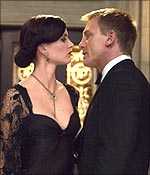 The new film is a crackling adaptation, and heartwarmingly old-school. Casino Royale opens in black and white, features a grainy bathroom brawl, and just when you're getting used to the way this Bond kicks, makes him jump up and shoot at the camera, making the screen go red. Wow. Cut to a superbly animated title sequence and the finest Bond song since the Sean Connery [Images] films (It's called You Know My Name. Chris Cornell, take a bow) and the purists are enthralled. This is bloody classic.

Modern day reinterpretations of kitschy, iconic heroes see them getting grittier, and Bond is no exception. The film goes unfailingly back to the basics, and is resultantly darker, more realistic (by Bond film standards, anyway) and less packed with wisecracks. It's a studied departure from the campy madness (invisible Aston Martins, anyone?) Bond cinema had descended to over the last few years, and a huge gamble. The Bond of the screen was markedly different from the one in Fleming's novels; would this blurring of the lines now be accepted by people who go to the movies to see supercars, bizarrely named heroines and lethal hats?

It's a gamble, but director Martin Campbell (it's unbelievable that he also made the dreaded GoldenEye) has managed to make it stick. It's radically different on the surface, yet not quite as much as you might initially think. While he might be a Bond that gets beaten up, James can still cock an eyebrow and deliver a quip at gunpoint, and he's new-age enough to fit in: he broods, trashes Aston Martins to save women, falls in love, and weeps. Thankfully, he still almost gets himself killed, and that's what we're there to watch. And yeah, he still gets by because of lucky coincidences and unlikely allies.

As mentioned, Dan Craig is very, very impressive. He's already proven himself as an actor, but Bond needs tougher shoulders. Especially this Bond, a primary MI6 creation who has just earned his double-0 credentials, his license to kill. Craig does the job manfully -- throwing himself off a crane, chasing down an airplane, and trying to pick up a chick underwater -- and shows super potential. He hardly displays an ounce of overkill, and brings back an intense believability seen previously only with Connery (and Timothy Dalton, at his finest moments). And he can deliver a line real good.

Ignore the hyperbole: it is far too soon to crown this man 'the best Bond since Connery,' but he has made an explosive debut and we wish to see him again -- if he shows this kind of consistency for a couple movies more, we'll ignore the blondeness and crown him Sean II. Honest.

Eva Green [Images] (yummily showcased in Bernardo Bertolucci's The Dreamers) is a fantastic Bond girl. Right from the minute Vesper Lynd, the stunning treasury official, meets James Bond, their repartee is magnificent. The film features some of the best Bond film dialogue (despite being really low on the double-entendre, I agree, but perhaps it's a good thing to let us take Craig seriously first before giving him the lines?) and the magical Green seems to have gotten the choicest picks. She seems cleverer than James and makes him chase her, and she is certainly desirable enough to have 007 on the ropes. As Bondgirls go, she is rather special.

Mads Mikkelsen plays Le Chiffre, an underwhelming villain. There is nothing wrong with his performance per se, but the character isn't fleshed out enough to make him appear sinister. He doesn't loom over Bond, isn't breathtaking at the card table, and hardly ever seems to menacing. Alright, his tearducts drip blood, but Bond traditionally deserves a greater baddie.

Perplexingly, Dame Judi Dench is still M. It's crazy, considering this return to Fleming's basics. Sure, the woman can spout a cold line of dialogue in her sleep, but the novels showcased a fascinating dynamic between Bond and his male boss, a father figure and one of Bond's only true confidants. Here, she's a married woman whose house James breaks into with ease, treating her like a matronly schoolteacher you know won't really crack down on you. Nah, call me as sexist as 007, but M needs to be a man.

The joy of the film lies in its lighter moments, and there are often times director Campbell forgets this. The action setpieces are mostly chases, and while the first one is an absolute corker, they go gradually downhill, from 'wow' to 'aah' to 'uh-uh' to 'again?' It's a bit of a shame, as the action actually cools down the film's narrative pace, seeming forced and not quite as spectacular.

The script's gems lie in the words, with the CIA offering Bond funds to gamble, and scoffing at the money spent -- they would, actually. Le Chiffre's prospective gambling loot is less than it costs to make a Spider-Man movie. Come on. The detailing could have used more work. Fleming's books were meticulous about detailing Bond's process -- they taught you exactly how bars would be miserly with the vodka in a martini -- and this film could really have used some of that. It would have been smashing to see just how Bond cheats at cards. As of now, the card game is all personality and little substance. Craig is fab, but the sequences could have been so much better.

The narrative is flawed, with a slow-paced first and second act culminating in a flurry of third-act twists and countertwists. Just when the end credits seem poised to roll, the plot is unfolded further, in abrupt bits. The twists aren't spaced out enough, and end up seeming painfully ridiculous. Also, the car is fatally underused.

But just when the film is turning downright loopy, Daniel Craig holds up a stengun and says The Line. Five words of introduction and the most iconic line in cinema history.

And that saves it all. Well done, Mr Bond.