Master Kishan, 10, has found a place in the Guinness Book of World Records as the youngest film director in the world. The record was earlier held by a 13-year-old boy from New Zealand [Images].

Kishan's Kannada film, C/o Footpath, has been dubbed in other Indian and foreign languages too.

Kishan has already won two state awards -- for his Kannada film, as well as for his performance as a child actor. 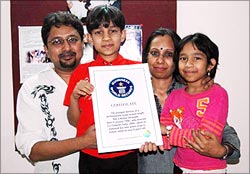 While Kishan wrote the story, dedicating it to the underprivileged children of the world, journalists Udaya Marakkini and Jogi have written the script. Mysore Harish has penned the dialogues.

The story revolves around a slum boy, who, along with his friends, creates a revolution in the field of education with the help of some benefactors.

Kishan has acted in over 25 Kannada films like Swathi Muthtu, Maharaja and Vamshakkobba.