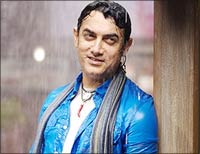 Brando, that most insouciant of great actors, contemptuously once said that all producers do is casting. What else is there? By this regard, this Friday's Yashraj release is right on the money. It stars Kajol [Images], India's numero uno actress of the 90s, opposite Aamir Khan [Images], who, after Rang De Basanti, is enjoying more box office buzz than ever. But as Fanaa [Images] defiantly emphasises, a mere casting coup does not a good film make.

Having said that, the actors do quite well, for the most part. Kajol isn't given too much to do, but she's the one who infuses a spirit into the film. Aamir performs manfully, but the script requires him to lay the histrionics on thick, and he obliges. The flaws lie in the words, and the man wielding the megaphone.

Kunal Kohli's last film, a romantic comedy ripped charmlessly off from When Harry Met Sally relies on touch-and-go encounters, on happenstance and serendipity, which is all very well if you like that sort of thing. This time the director tries to make his film about something, turning it into an impossible love-conquers-all-in-the-backdrop-of-nukes mish-mash. And it turns out to be a damp squib, essentially because he continues to stick with a contrived string of absurd coincidences that somehow worked for him earlier.

The film starts off alright. Kajol, not sure exactly where the national flag is -- she's blind, you see -- is facing a different direction as the kids sing Saare jahan se accha (immediately after it plays instrumentally in the credits) and a helpful teacher points her the right way. She breaks into a grin and you can't help but smile. The actress has immense screen presence and a very contagious enthusiasm, and while she may play a sightless girl, her eyes continue to brim with life.

Her name is Zooni Ali Baig, and she's the girl you met in DDLJ, only blind. This one too waits for her prince as she takes trains to distant lands (Delhi, in this case) with friends prettier than her (one in particular, playing Bobo, pretty much makes up for a lot of the first half) and waits for signs. Her parents, Rishi Kapoor [Images] and Kirron Kher, are a warm old couple who spend their afternoons spouting lines of shayari and nostalgically recollecting their first meeting. Zooni's heading to Delhi with her friends to perform at the Rashtrapati Bhavan [Images], (or some such. You'd be best advised to stop noticing the details right from the start) hence the teary goodbye.

Zooni's prince turns out to be Rehan Qadri, cockiest of tour guides. Aamir enters the film a la Raja Hindustani, spread-eagled roguishly atop a bus. Leaping down to flirt with the ladies, he falls to his knees, and Zooni's sure he's the one. Rehan looks haggard and his look is extremely unflattering, to say the least. Lucky for him Zooni is obviously not the most superficial of girls.

The two fall instantly in love and embark on Jatin-Lalit's repetitive songs, and while he suddenly goes from charmer to distant don't-believe-in-love mode (with a bizarre Lara Dutta [Images] cameo thrown in), they do share some sparks -- albeit encumbered with sudden spurts of shayari every couple of lines.

She gives him her heart with complete abandon, and he, after some initial 'love ain't my thang' bits, picks her up (yes, literally. Aamir never ceases to surprise) and decides that since an eye-operation is possible, Zooni should chance it. She does, and before her folks hurry up and arrive, the only kind of blind she is, is 'in love'. If these lines sound painfully trite, its because I'm trying to comprehend the kind of scenario that must have � on some level -- sounded like 'a good film' to the people who hastily decided to jump into it.

But while the first half is predictably cheesy, you don't mind it much. Kajol has an effortlessly effervescent screen presence and Aamir conjures up moments where he rises above the trappings of the script, borrowed liberally from Bollywood hitmakers of every era. You decide that the film is building up towards something � but you're wrong.

The second half is chock-full of twists, and so one can't delve into much discussion regarding plot. Suffice it to say that there's an extremely GI Joe kind of terrorist chaos afoot, and an enterprising group of baddies have actually stolen enough parts from India, Pakistan and a couple of neighbouring countries to piece together their own nuclear missile. Yes, you read that right.

The film is a scrapbook of Bollywood clich�. From little kids who spout over-precocious emotionally manipulative lines to clueless intelligence officers seemingly lacking in common sense, everything's taken from somewhere else. But moments aren't assembly-line creations, and the film never ends up being compelling.

The characters are written too feebly to elicit any involvement, and while you're excited the first couple of times Aamir tosses back a one-liner, it isn't enough. By the time Rehan and Zooni are drowning in the seas of high drama, you really don't give a damn about what happens to either of them. You like Zooni, sure, but that's simply because it's Kajol. She's given tragically little to play with, but her very Kajol-ity (forgive me, it was a really long film, but you know what I mean, I'm sure) makes the character almost work.

Rehan is a bit of a stretch, even for Aamir. The character passes through entirely connected phases, from focussed determination to carried-away schoolboy lover, and his motives are so unclear it's ridiculous. And it really doesn't seem like an Aamir kinda role. The actor has to be charming and dark, romantic and sinister, and the unsubtle script and director seem to want him to turn into a visibly intense maniac as well as an action hero (which our tiny little man has never quite been, God bless his soul). Ironically, when he rushes onto the scene exhausted and heaving, nostrils flared, he ends up looking like he's playing at a bad Shah Rukh [Images] impersonation.

Another massive Fanaa flaw is its length. Obviously a man not accustomed to the finer points of editing, Kohli lets his film stretch windily on. For a clich�-ridden predictable movie rife with inconsistency, this is not such a good thing. A little kid pipes up and says something about Rahul Dravid [Images], and you smile indulgently, before he brings in a 'Mr Dependable' analogy that makes you wince. The script is so contrived it hurts, and despite a slew of good actors -- Tabu [Images] does well, and Shiney Ahuja [Images] appears for a second or two � the anti-terrorist scenes bring up thoughts of Ajit and a young Dharmendra [Images]. This movie makes Dus seem realistic in comparison.

While one can forgive the lack of credibility, the denouement is such a massive hoax that it seems impossible not to complain. Everything comes together (and apart) in with an extremely melodramatic series of coincidences, and maybe Mr Kohli should stick only to romantic comedies.

But you'll watch it because you're still curious, and don't believe me. And the filmmakers will make tons of money. And I won't. But when you're plodding through the unending climax, willing the end-titles to appear, remember -- I warned ya.