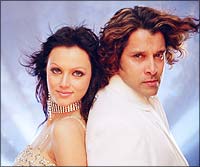 don't speak Tamil. I can't remember the last time I watched a film in that language, am averse to the food from the region and stay away from even reading film reviews from there -- perhaps due to a longstanding, deeprooted Fear Of The Rajnikanth [Images].

So, watching Anniyan, a superhit Tamil film released exactly a year back and dubbed into the Hindi Aparichit, wasn't exactly top of my charts, but convinced that anything's better than

what Bollywood serves up nowadays, I took my hirsute colleague Krishna (who loved the original) along and braced myself for a Masala Dosa spectacle.

Director Shankar serves it up grandly, with a preposterous tale of law, disorder, anarchy, vigilantism, and, well, songs.

Tamil cinema seems used to these extremely colourful visual standards, featuring tulip fields and millions of extras, and while one was filmed imaginatively in an extremely hip setting, they mostly seem pasted onto the film regardless of plot-point or aptness -- and this coming from someone who sits through at least one mindless Hindi film a week. No, these folks make some truly over-the-top songs, making Mumbai's efforts pale by comparison.

The film is loaded with such commercial concessions, at every step. From melodramatic flashbacks to traumatic childhoods, from clich�d sidekicks to mega fight scenes, equalled only in implausibility by the depiction of modern medicine...

But I get ahead of myself.

Aparichit, despite boasting of enough masala to make you sneeze, nevertheless stands out as a refreshing, very watchable film.

The film is essentially about three characters, all played by Vikram, a rather superlative Tamil leading man who breathes credibility into decidedly unreal scenes.

Ambi Ramanujam is a geeky, fastidious lawyer trying hard to impose rules at every step, watching the world around him sink into mediocrity as a result of constant negligence and social apathy. 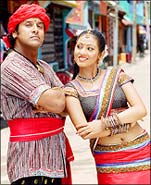 Remo, cockiest of smooth operators, gets the groove on with Yana Gupta [Images] and woos Nandini (actress Sada), the girl of Ambi's dreams as the lawyer helplessly and shyly sighs from the sidelights.

A chain mail changes everything. A postcard says that Aparichit, The Stranger, has arrived to deliver revenge. In Bruce Almighty fashion, the common man is encouraged to log on to this grim reaper's Flash-based website, so he can then wreak vengeance on the offender. And what sweet retribution he doles out.

With ruthlessness that would do

Without giving anything away -- even though the basic premise is obvious enough early on in the film -- Aparichit revolves around these three characters and the powerful, well-packaged conflict between them.

Like Shrek reminded us, Anniyans have layers to them (groan) and we aren't just talking about special effects here.

In a Rang De Basanti [Images]-lite manner, Shankar preaches through his commercial films, his earlier Nayak also giving the masses a simplistic message. This film, in its own way, tries to do the same, attempting to rouse a sleepy society used to making everyday concessions and adjustments.

The film would be a pretty ordinary actioner, a few spectacular action set-pieces nevertheless, were it not for Vikram. The actor rightly overplays all three characters to near-perfection, and even when the dialogues jar -- Krishna squarely blames this on the abysmal dubbing job -- he manages to convey them with a sincerity we don't get to see much of, especially in Bollywood.

A major climactic scene sees all his characters take turns in front of the camera, and Vikram does magnificently, a Jim Carrey-esque chameleonic turn worth applauding.

Coming back to the Hindi dubbing, it is really bad.

Krishna ferociously asserts that not just is the dialogue hackneyed and trite (which would be evident even minus his insistence), but it is also toned down -- Aparichit's violently profane tongue is turned into a merely gruff voice � and the Hindi voices used are mostly unsatisfactory.

But after a while you get used to it, and while most of us might want to see the original with quality subtitles instead, that is a pipe dream especially in terms of a theatrical release, and this is not so bad.

certainly gets points for trying. Hindi-speaking masses could conceivably warm up to a film like this, mostly due to the novelty factor -- it isn't the kind of popcorn they're used to. Watching

this dubbed version is infinitely better than seeing it remade for Bollywood by a Sanjay Gupta or a Priyadarshan [Images], and perhaps dubbing actually holds the key to a far bigger question: How to nationalise region cinema, take it beyond borders?

Dubbing is a relatively inexpensive process, and a limited release in multiplexes can only serve to drum up some more interest in an already successful product. It's the same technology that makes Jurassic Park and Spider-Man accessible to the rickshaw-wallah, and look how much moolah those awfully-done dubs coughed up. Regional filmmakers with blockbusters or critically raved about cinema would do well to mull over this option.

Overall, Aparichit is a slickly made, well-paced actioner that works quite well, despite the dub. The film is engaging and crisply scripted, and the action is never too excessive, lightened by jokes and general tomfoolery that never offensively interrupts the actual plot.

The fights are overdone but fun, and the death scenes ingeniously executed. Things seem obvious but never quite turn out exactly as anticipated, and, as a ride, Aparichit doesn't really let you down.

If anything, you laugh at its most ridiculous bits -- a 'serious' conversation between a doctor and the adequate leading lady Sada makes me laugh out loud every time I recollect it -- and have a blast either way. Isn't that what masala is all about?

Now I want to watch Anniyan. Aparichit could have been a super entertainer, but the disastrous dubbing robs the film of its flavour, reducing it to a merely enjoyable watch.

Either way, I'm glad I saw it. A far better bet than any Hindi release this month.