Deepak Tijori insists on making films (Oops!, Khamosh, and Fareb) and tormenting an unsuspecting audience. The tragedy is, his enthusiasm is in sharp contrast to the dwindling quality of his creations.

As you are already informed by the screaming posters, Tom Dick and Harry [Images] is 'a mindless comedy of deaf, blind and dumb.' It's nice of them to warn us, except that it's not a comedy. No siree, whatever else it may be, a comedy it certainly is not.

Deaf Tom (Dino Morea [Images]), blind Dick (Anuj Sawhney) and dumb Harry (Jimmy Shergill [Images]) somehow come to share an apartment; how and when is explained at leisure for about an hour and a half, interjected by a couple of foreign-babes-in-bikinis songs.

The apartment is owned by someone called Happy -- a Sardar, complete with a loud 'Punjabi' voiceover whenever he enters the frame. A lecherous man, Happy is not above paying the maid for sex and ogling girls half his age. This is all, of course, supposed to be funny. The 'heroes' fall for a neighborhood hottie (Celina Jaitely) and subject the viewers to more 'gags' as they fall over each other trying to 'patao' her.

Enter Gulshan Grover [Images], in a strange costume and named Soprano, who profoundly speaks to the mirror in bad English, and keeps portraits of Osama Bin Laden and Hitler [Images] as inspirational tools. He is in the 'business' of trading girls to foreign countries (yes, women really get the deal in Tijori's films. They are either kidnapped, molested or being pataoed, when not being referred to as 'items').

While Himesh Reshammiya [Images] appears and disappears without warning, the three save Celina from the kidnappers and get entangled with Soprano.

The villain has on his panel of advisors, Mogambo (I feel silly even as I write this), Gabbar Singh and Shakaal, while in the dhishum-dhishum climax scene, the three heroes dress up as Mangal Pandey, Salman Khan [Images] from Tere Naam [Images], and 'Anthony' from Amar Akbar Anthony. Sigh, we get it, he's trying to make it spoofy. If only it were that easy. The film ends up looking like a bad fancy dress competition.

Predictably, even the 'items' -- Celina and Kim Sharma [Images] (one of whom turns out to be an undercover cop), bash up the baddies, and all's well even before anything begins. The man behind the 'sting operation' to nail Soprano is, by the way, a cop played by Shakti Kapoor, in a bizarrely uninspired casting decision.

The dialogue is cheap, regressive and completely lacking in wit. The three protagonists are repeatedly called 'defective pieces'. Eve-teasing too is supposed to be fun, as Dick takes advantage of his blindness to grope women. Other "comic" bits include at least a hundred jokes on condoms, and then there's the mandatory Bobby Darling cameo. 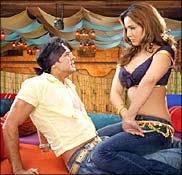 Interestingly, the parts that are serious actually end up being comical. Like the Hollywood-inspired scene where Soprano plays with the globe: now those graphics are certainly worth a chuckle. Towards the end, Shakti Kapoor talks directly to you, the audience, and requests you not to leave as the film is not yet over.

The cinematography and production values are unbelievably archaic. Himesh Reshammiya provides a few hummable numbers, unimaginatively filmed. Dino Morea and Anuj Sawhney put in spirited performances, while Jimmy Shergill, who has proven himself in films like Haasil and Yahaan [Images], seems a bit lost. Kim Sharma is likeable as the motormouth fisherwoman, however inconceivable her character may be, and Celina's toned stomach and pout do their job.

In a recent interview, Tijori called the film a comedy of errors. Unfortunately, this film has more errors than comedy.