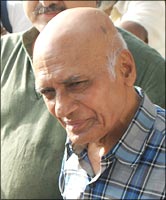 He began his career in 1940 with Prem Nagar, but took off in 1944 with Ratan, where he created his own style. All of India was crazy about him. His music had that simplicity. Songs like Jab dil hi toot gaya and Gham diye mustaqil from Shahjehan touch you.

Naushad: Composer of the Century

He wouldn't take up anything and everything though. He would analyse a subject before deciding to work on it. Just because you have 500 movies to your credit does not mean you are popular. You should look at the quality of your work too. In songs like Uthaye ja unke sitam and Tu kahe agar from Andaz, Naushad exploited the voices of Lata Mangeshkar [Images] and Mukesh as only he could do.

I first met Naushad in 1947, when he was already an established composer. He had his music room in Kardar studios, and I was there for my film, Heer Ranjha. After that, we met many times.

Usually, when a person becomes famous, he gets an attitude and looks down on others. But that was not the case with him. Fame didn't change him at all. He was still very humble and down-to-earth. He was very friendly, and had the legendary cultural refinement that came from his roots in Lucknow. He knew how to talk to his seniors and juniors 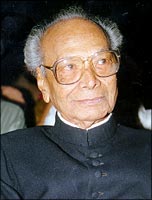 His contribution to classical music is tremendous. Usually, there is a restricted audience for it, as very few people understand it well. But with films like Baiju Bawra (Man tarpat hari darshan ko aaj), Kohinoor (Madhuban mein radhika nache re) and Mughal-e-Azam (Prem jogan ban ke), he made it available and understandable to all.

One thing I would like to share is that my wife and I were so much in awe of him that we would touch his feet wherever we would meet him -- irrespective of whether he was alone or among a crowd. He liked that. You could make out from his eyes -- there would be a shine! He knew the respect was straight from our hearts.

Whenever I called him in the last six months, he would chat for at least half an hour. He would ask me to visit him, as he had something very important to tell me. But I didn't go because I knew he was very ill. I knew he would get excited seeing me, and that would affect his health further. Now, I regret not seeing him. I should have gone; maybe he did want to tell me something really important.

People think Naushad started getting less work, which is why he faded out. I think he still got a lot of offers, but chose not to take them up, as he was very selective. Maybe the work that came in later did not appeal to him. The standard of music had started deteriorating by then -- there was nudity in songs. In such circumstances, there was no place for Naushad and Khayyam.