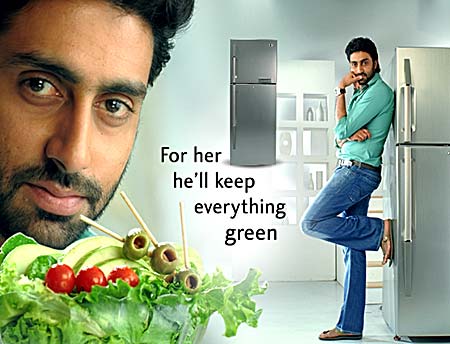 The director gives us the behind the scenes dope on the ads. Over to him:

"Shah Rukh has being in the industry for long and has done innumerable ads. He knows exactly what to do. So from Abhishek, you get freshness. And he's cool, which was required for the LG commercial.

Shah Rukh has spunk, and that was required for the Hewlett Packard product.

Shah Rukh does exactly what is needed for the ad while Abhishek gives us a range from which we can select.

Because the LG ad required a cool Abhishek, I kept the camera rolling and the music on, even when we were not shooting. Later, we retained it in the ad. The crew really enjoyed themselves.

In the LG ad, Abhishek is shown waiting for his dream girl and he plans his home for her and how everything should be neat. In the four-minute ad, he looks at the washing machine, microwave, refrigerator and air conditioner...

Throughout the ad, we have tried to give the products the prominence. Later, the ad will be divided and individual products will be introduced.