Amitabh Bachchan is back to work, after a four months break. He was back on the sets of Karan Johar's [Images] latest film
Kabhi Alvida Na Kehna this morning. 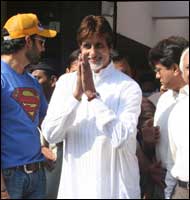 Deepak Sawant, the Big B's [Images] make-up man told reporters, "Mr Bachchan sounded very excited to be back at work." The actor was off limits to journalists and cameramen.

Bachchan has been absent from Bollywood sets since the last week of November when he complained of intestinal pain on a visit to New Delhi. He was flown back to Mumbai for an emergency operation.

He underwent an operation on his small intestines at Mumbai's suburban Leelavati Hospital and was discharged on December 17 and advised extended rest.

It was said that nearly Rs 100 million commitments were riding on him at the time and there were major worries on how he would honour these film and advertisement commitments. Bachchan had nearly half a dozen films to be completed prior to his illness; the major ones being -- Kabhi Alvida Na Kehna, Baabul, God Tussi Great Ho, Sholay [Images] (Part II), Sarkar 2 and a Bhojpuri film Ganga.

Never in the last 25 years has the Big B had such a romance with box office, with 2005 bringing one hit after
another. His three films -- Black, Bunty Aur Babli [Images] and then Sarkar, with Ram Gopal Varma -- created magic at
the box office and were the big commercial successes of 2005. And just when he was on a roll he was hit by illness.

Rumours floated about that Bachchan would never come back to work again. They got even more hectic when he pulled out of the Star Plus game show, Kaun Banega Crorepati 2 in January.

Said Ravi Chopra, producer and director of Baabul, when asked if Bachchan would perhaps be unable to complete the film, "Absolutely not. I am sure he will do my film. Everyone falls ill and recovers. I am eagerly waiting to see him back on the sets after his recovery."

The first assignment Bachchan did after his illness was a recording for a song for Baabul February. Music director Aadesh Shrivastava said, "It is always a splendid experience to record a song with Mr Bachchan."

Bachchan will shoot for Bhojpuri film Ganga on Tuesday at Mumbai's Fim City and next week he will be on the sets of Ravi Chopra's Baabul.