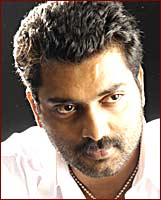 The release record of a recent Tamil film called Chithiram Pesuthadi is truly unbelievable. When the film, directed by Mishkin, was first released without any publicity, it sank without a trace within a week. Noted producer and distributor Oscar Ravichandran saw it though, and was impressed. He decided to re-release it with a lot of publicity. And it's now on top, running houseful at theatres all over.

Narain was an unknown in Tamil, but he is a well known name in Malayalam having acted in Adoor Gopalakrishnan's Nizhalkuthu and Jayaraj's 4 the People. He was the hero of Satyan Anthikad's Achuvinte Amma as Meera Jasmine's [Images] man. Both his commercial ventures were blockbusters in Malayalam, at a time when his name was Sunil. He decided to change his name to Narain when he made his debut in Tamil.

Why? He tells us this, and more�

From starting your career as an assistant to cinematographer Rajeev Menon to acting in Adoor's film, how did this transformation take place?

My dream had always been to be an actor, but my parents who have nothing to do with films were aghast. My father would let me join the Film Institute only if I did a technical course. Although I wanted to be an actor, I did a course in cinematography at the Adyar Film institute.

When I found out that Rajeev Menon needed an assistant, I went and met him. I told him I was interested in cinematography and direction but, at the end of the interview, I blurted out that my desire has always been to be an actor. I knew it was a blunder. He was silent for some time, then said I should become a good cinematographer first.  That comment was very encouraging.

In the second year, when I was working with Rajeev, Adoor Gopalakrishnan and his cinematographer Mankada Ravi Varma came to meet him. They wanted some camera equipment for Nizhalkuthu. I told Adoor then that I was interested in acting. Though he didn't say anything, he later asked if I knew how to emote. I said, yes. And that was it. I was asked to go to him with the equipment and, at the same time, I got a message saying I was going to act in his film. I didn't know how to react. I was to play Oduvil Unnikrishnan's (the hangman) son. I had never imagined making my acting debut in Adoor Gopalakrishnan's film! 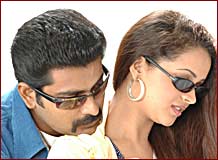 Your next film was Jayaraj's 4 the people, which was a blockbuster�

I was told, initially, that I would be playing one of the four boys in the film. But when Jayaraj saw me without a moustache, he said I was going to be the police officer. I was heartbroken, until he told me the police officer was the most important person in the film. It turned out to be so. My fear was that Malayalam cinema had seen some great police officers in Mammooty and Suresh Gopi; where was I in front of them?

After its success, were you flooded with roles of police officers?

I was. I had no intention of doing any role that came to me. I didn't want to slot myself. The roles I got were either those of a police officer or a thug. I waited for 8-9 months to get a good film.

And was that when Achuvinte Amma happened?

It's a funny story. I was in the middle of shooting another film called Annorikal, and happened to see a newspaper report about Achivinte Amma. It said a newcomer would be acting with Urvashi and Meera Jasmine. Lucky guy, I said to myself, not knowing that Satyan Anthikad had thought of me for the role. I got a call from him two days later!

Unlike your earlier roles, this one was lighter, like the ones Mohanlal had done in earlier Satyan Anthikad films�

I had to shed a lot of inhibitions to be Jijo, the character. Till then, I was under the impression that I had lost my ability to be funny. It was like rediscovering my college days. My experiences in the film industry had made me a person who didn't always smile.

The film was a blockbuster and all the reviews said you were a revelation.

But what I found was that there are no good roles like that for youngsters in Malayalam films. There are either crass comedies or some masala films. After films like Nizhalkuthu, Achuvinte Amma, etc. I wanted to act only in good films. 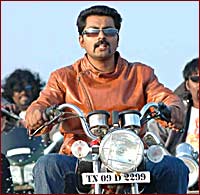 Is that why you decided to shift to Tamil films?

There are roles for young actors here in Tamil. In fact, Chithiram Pesuthadi came to me even before the release of Achuvinte Amma. When I first met Mishkin, the director, I was doing Achuvinte Amma, and he wasn't convinced if I could be his rough and tough Thiru. I was a clean-shaven sophisticated guy with spectacles. When I met him next, I had a moustache and beard. But I must say I felt confident about the role of Thiru only because of Mishkin.

I dedicated 8-9 months for the film, and couldn't do any other role because of the different looks I had to portray.

It must then have been heartbreaking when the film didn't do well initially.

I was very, very heartbroken. On the verge of depression. But Mishkin was sure it would pick up. The problem was, when the film was withdrawn from theatres after the first week, where was the question of word-of-mouth publicity. Luckily for us, when Oscar Ravichandran saw the film, he saw great potential and re-released it. You can't imagine how relieved I am to know the film is now doing so well.

After establishing yourself as Sunil, why did you change your name to Narain? Has it anything to do with astrology or numerology?

No. I just never liked my name; it's so common. I had been planning to change it from the day I entered the industry, but it somehow didn't materialise. The name Narain came to mind because of Swami Vivekananda. He was called Naren but I wanted the spelling Narain. I did consult an astrologer.

And, you know what the first billboard I noticed after I became Narain was? The one featuring Narain Karthikeyan [Images]. It was then that I realised he had the same spelling!