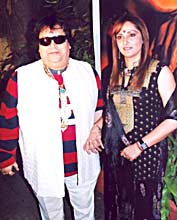 Jaya Prada says she wants to "return to films as a new Jaya Prada."

She is producing a film, and singing in it.

"In fact," the actress says, "I'm not only singing for the first time I'm also recording a hip hop song with Adnan Sami [Images] and Bappida (Lahiri), which is quite a novelty for me."

"I've been very busy with my political career. But I've just completed Nitin Manmohan's Tathasthu with Sanjay Dutt [Images] and Amisha Patel [Images]. This is my first thriller. So I'm doing quite a lot of things for the first time!"

"Bappida and I go back a long way," she continues. "Remember Tohfa, Maqsad, Sharaabi, Aaj Ka Arjun and all those hit songs he composed for me? I'm very excited about sharing the microphone with Bappida and Adnan Sami. Quite an exciting mixture."

How does she rate herself as singer? "Wait and see. You'll soon know," is her reply. "I love to challenge myself all the time."

Her production will have Priyanshu Chatterjee and Irrfan Khan [Images].

"I'm not paired with either. It's a very different kind of film," says Prada.

The film will be directed by Kittu Ghosh. Jaya says Ghosh has done short films before and "is a man of intellectual leanings."

"That again gives me a chance to do something away from my sweet image. I can't do the conventional heroine's role," she says.

She thinks politics has helped her.

"Wherever I go people recognise me as Jaya Prada the dafli-wali from Sargam. I'm flattered that they still remember my first Hindi movie. They always want to know after a political rally when my next film is releasing. Being an actress has been a plus point in politics."

"I've never said no to acting offers. At the height of my film career I joined politics because I felt I had more to do than just act. I'm proud to say I'm not like some other actors turned MPs who are accused of not doing anything for their constituency. I'm proud to say I've brought Rs 300 crore to my constituency. I don't want to feel I've neglected either of my two activities as a politician and actress. Now, even when I'm returning to films, I feel I never left. People in the industry tell me they've missed me," she adds.

"Till date people miss me. I still remember the great Satyajit Ray's compliment. To be called a beautiful lady by a man of his stature is not a small thing."

Prada is all praise for Samajwadi Party leader Amar Singh.

"He is my mentor and guide," she says. "When I was isolated politically Amar Singhji took me into the Samajwadi Party. It's rare for someone to give you a helping hand when you're going through rejection. Amar Singhji and Sahara-shree Subroto Roy have supported me. I'm so lucky to have such good people around me."