Unlike most superhero films, Krrish [Images] doesn't depend on the script, the catchphrases, the direction or even a theme tune. It single-heartedly concentrates its energies on the hero, with each drop of the leading man's sweat falling in super slow motion.

The film isn't about good versus evil, superpowers and 'great responsibility,' love amid masquerades -- the film is about Hrithik Roshan [Images].

A sequel to Koi Mil Gaya, Rakesh Roshan's mega budget follow-up more than eclipses the first film. Which brings us to the point: did you like KMG in the first place? If you did, then you would, and should, have already bought a ticket to this one, because it's infinitely better.

On the other hand, if you weren't a fan the first time round, I'd really only recommend it to kids -- and giggling girls who drool over Hrithik. It's cornball big-screen clich�. And perfectly enjoyable -- if you like that sort of thing.

We open with a young kid proficient with his Faber Castell colour pencils. An old-yet-refusing-to-stay-grey Rekha [Images] is alarmed at this, as the background score constantly emphasises. The chubby youth, it is soon revealed, is a smart 'un, a boy in Class I who helps Class III students with their math homework. And this can't all be chalked to the Bournvita he drinks. (Okay, okay, there's plenty of product placement throughout the film, but as long as it's not interrupting with the narrative per se or doing a Viruddh, let's not complain, yes?)

The school principal tells us that the kid is super-intelligent, obviously inheriting the powers from Rohit (for those unfamiliar with the original, Krishna's dad was touched by an alien -- and got superpowers). Granny Rekha is devastated (Salim-Suleiman crank up the background music further) and decides to home-school him.

The boy, dressed perennially in vests, doesn't do much except ride his horse, and (thanks to his powers) try to overtake it. The next bit seems quite a tribute to Amitabh Bachchan [Images], not least because Krishna's white steed is named Toofan (Bachchan had a similar animal in the superhero film of the same name). Anyway, the camera alternates between young Krishna and Toofan running, and suddenly in a 1970's-style cut (remember the Angry Young Man origin shots during the casting, running legs going from bachcha to Bachchan?) switches to a full-grown horse, chasing which is our bicepped leading man. Ta-da! (Please say that's homage!) 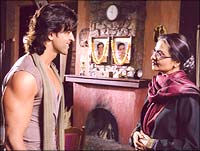 Krishna, a sculpted wastrel who hangs around with kids, still doesn't seem to have gotten the hang of his powers, despite growing up with them. Every leap he takes fills him with incredulous delight, and he is constantly beaming innocently, most signs of a sharp intellect ruined. Being educated by melodramatic Rekha dadi would conceivably do that, yes.

Anyway, the kid who was once hailed as a prodigy and who explained basic financial definitions with great precocity now looks at a glider and identifies it as a big kite.

More Tarzan than Bruce Wayne, Krishna of the jungle scampers up trees to scoop up the falling Priya (Priyanka Chopra [Images]), and obviously saves her life. After much tomfoolery where she and her accompanying adventure camp believe he is a ghost, Krishna and the lady become friends, sing a song (isn't that what we all do?) and they leave for Singapore, with him pining after her.

Poor Priyanka gets an extremely tough role: A na�ve girl who is initially taken in by a prank, scared but intrigued, and then smitten. Priya blows hot and cold as she then becomes worldly and (harmlessly) selfish, but is finally swept away by Krishna. In short, the actress has to convincingly be charmed, a much harder proposition than acting charming.

It's also an updated throwback to the 1970s, the kind of role one could imagine a Parveen Babi pulling off with great ease, but something Ms Chopra struggles with. An interesting dilemma given that her next big screen role is Zeenat Aman's [Images] in Don. Hmm. Anyway, here, it helps that she is distractingly pretty. And that it isn't her film.

Despite the semblance of a plot and all the requisite devices (evil scientist included), this is The Great Hrithik Circus. He jumps, he grins, he throws his sharp-enough-to-butter-bread nose into everyone's problems. Krishna is a goody-two-shoes leading man, one hesitant to use his powers and even consider himself a hero, and while the part is written with cloying cheesiness, Hrithik is earnest enough to carry it off.

While the actor may not immediately convince as the enthused Krishna, his infectious delight grows on you as the film goes on, and his work in the scenes right after the interval is disarmingly good. And his screen presence is immense.

But while the men and women who drool over Hrithik will have a field day, watch the film thrice and freeze-frame shots longingly on DVD later, the rest of Krrish is drab. The narrative is laboured and extremely lazily told, especially in the first half. The mediocre songs, picturised in their completeness, have absolutely no room in the film, and they are impossible to forgive.

The second half has significantly more baloney as the character discovers the plot twist and we move towards an inevitable conclusion, with superhero-ends haphazardly left loose throughout. The lack of any depth is saddening.

And then we come to the crucial question of originality. As discussed earlier, writing a superhero from scratch is tough. Do the Krrish writers succeed? Not really. While luxuriously taking up almost three full hours of screentime, they plod through an extremely derivative landscape. Ideas are borrowed from a bunch of movies -- the few people who have watched John Woo's Paycheck will feel some d�j� vu -- and effect-shots from a million more, including The Matrix films, Spider-Man, and Crouching Tiger Hidden Dragon. And watch out for the distinct Batman hangover when he actually dons the mask.

While effect-laden scenes stand out as pale imitations of the aforementioned blockbusters, and some truly ambitious scenes (particularly in the second half) fall flat, the effects are generally pretty tremendous by Hindi film standards. Despite dismally limited on a creative and conceptual level, the scenes work well enough overall.

Bollywood is full of superheroes

Krrish is mired by predictability. There are no big revelations, no sudden surprises. There's also no real character involvement, the viewer not actually caring enough about Krrish but just, like the protagonist himself, caught up in all his contrived coolth. However, the fact that it's exactly what the KMG fan expects is the reason the sequel will actually succeed. I'd bet on a sequel to Krrish.

So, is it a good superhero movie? No, but it's well-intentioned.

I sat through the film indulgently having a good time, wincing frequently at dialogue but overall quite carried away. It's a full-on kiddie movie, and while a lot of us might be scornful of Krrish, it's heartening to see fantasy officially entering mainstream Bollywood.