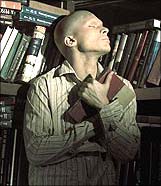 With all the buzz about superhero films this month, and the nonsense of calling something 'India's first superhero film' when the genre's several decades old, one thing must be said in defence of Alag. As far as I can remember, it is Bollywood's first mutant film -- and deserves a pat on the back instantly.

Alag is an interesting movie, building up curiosity as we delve into the leading man's character. As it goes on, we see the limitations of a big budget and lack of detailing begin to show, and it ultimately emerges an ambitious, but flawed product. The overall effect is strangely compelling though, making it a must-watch for comic-book fans and a very watchable effort for the rest. The film works, and this is saying a lot because writing a superhero film is hard.

Column: Bollywood is full of superheroes

The glut of superhero blockbusters in Hollywood, please note, is simply because they have a massive comic-book industry. Every big-budget caped crusader epic is based on tons of source material that has been around for quite a while. Superman and Batman emerged in the early 1930s, and Spidey was a creature of the 60s.

Therefore, making a superhero film based on an original character is extremely difficult, and very rarely works -- I can only think of The Incredibles as a truly original superhero success. You have to factor in important comic-book facets like origin, life, superpowers, villains, and work with a story arc while detailing the character completely, without even getting to show a lot of nuances on screen. Your fundas regarding the character and the story must be watertight, and the protagonist must be novel enough to make an impression without having a mythology to fall back on.

So, does Alag pull off this feat? Not really, but it tries.

Tejas is a special child, a hairless (look pa, no brows!) kid with an almost-visible halo around his head. Seeing his inability to bear sunlight, his father locks him away in a darkened basement, surrounding him with books to shut out the world. For 18 years, he stays and reads. Then, when his father dies, a pretty girl arrives and the shy young man (Akshay Kapoor) can't help but follow her out into the real world. 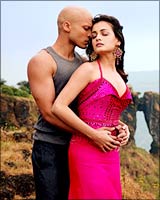 Purva Rastogi (Dia Mirza [Images]) is a strikingly attractive woman who takes troubled youth under her wing in an ambiguous institute that seems like a juvenile prison with striped-shirt uniforms. For those of you who object to her decidedly inappropriate garb � she responds to a police call in the middle of the afternoon wearing an elaborate black evening dress and heels � let us remember to stay in the comic-book spirit of things where, more often than not, bizarrely clothed women characters are created as an excuse to draw fantastic curves.

Anyway, Purva seems to have all the answers as she hands Tejas a pair of wraparound sunglasses when they head out into the world � a simple idea that could have saved his late dad all that money on opaque black curtains. Even as we're slowly getting used to the shiny-headed boy's powers, he is checked in and thrown into a cafeteria full of bullies so ruthless that the institute doesn't seem to be doing any good.

The goons crowd menacingly around their reticent prey, egging him on to slip a spoon on to his nose. Tejas, with a disarmingly innocent grin, takes his spoon and sets it vibrating� enough to build up a massive magnetic field, sucking up cutlery from across the cafeteria. Dal-splattered spoons and forks build up in a massive pile and the students, too stunned to wipe the rice from their faces, watch spellbound. It is a great, very impressively handled shot.

Unfortunately, while winning the audience over, it takes Tejas too long to make friends. The institute itself, run by an annoyed Jayant Kripalani, seems opposed to his powers and intelligence, bewilderingly insisting that he curb them. The mutant is traumatised, wanting to flee back into his rabbit hole. But, by now, the pretty Dia Mirza is in love with him, so he stays.

Akshay Kapoor, a fresh face free from the burdens of success, fame, or hair, is well suited to the part. His features are sharp and his performance relatively earnest, as he comes awkwardly to grip with the real world, the extent of his powers, and love. Dia Mirza has to look sad and beautiful, and the actress delivers, managing to stay restrained for the most part and looking radiant enough to be an inspiration for our freak.

The supporting cast, however, lets the film down completely. All the bit players (unrecognised faces, friends of the bully and minor policemen) are a dismal bunch, wasting both their lines and much screen time. This seems a result of the crippled budget the film worked with, something made more evident when we see the relatively ambitious special effects falling short in the second half.

A film like this is made or unmade by its writing, and Alag starts off quite well. Based considerably on Victor Salva's touching 1995 film Powder, we are intrigued by the unique Tejas, and quite incredulous as we keep getting introduced to his powers. In fact, when we hit the intermission, the film has built up to quite a tight terseness, with several plotpoints on the verge of unravelling. It is the second half, unfortunately, which exposes its flaws � and some lazy writing. We realise Tejas isn't fleshed-out enough as a character. He has enough superpowers � healing, telepathy -- to be virtually God-like, but there are no explanations in terms of origin and limits, conflict and cause.

And then there's the villain. Tom Alter is rather wasted playing mad scientist Richard Dyer, and while his intentions are vile enough, he simply isn't a gripping enough character for the climax. He might be a bad guy, but he's no supervillain, the lack of which prevents us from really calling Tejas a superhero. By the intermission, we like the bald hero but aren't sure what he's going to do or discover, what his motivations are � for all we know, Tejas could colour himself cobalt and join the Blue Man Group. 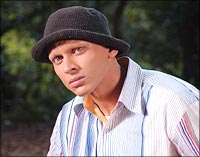 Overall, Alag is quite a stimulating watch. It is certainly a groundbreaking project in terms of theme, and is cleanly handled by director Ashu Trikha. Except for the awful � and completely out of place -- song bits, that is. Why would our brilliant hero lie in bed and wistfully dream of a life with hair and Hrithik-esque dance steps?

The film has some great moments, and is unashamedly comic-book material, but doesn't have enough of a back story. Superheroes only work when there's some substance to them, and Alag doesn't impress enough on that front. In fact, I wish more people see this film � which is quite unlikely. It is a thoroughly enjoyable watch, and I'd gladly pay to watch a sequel.

Alag gets points for sheer originality. And signals a start of things to come in an industry completely starved of science-fiction.

PS: Is it just me, or does the Alag theme song fit a certain Iqbal far more than it does Tejas?