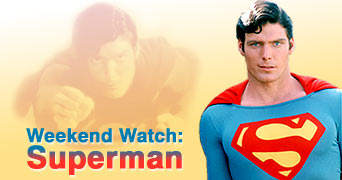 This review contains spoilers. But, made in 1978, the film is among the biggest hits of all time, so we're assuming you've seen it.

Superman is the kind of movie that really benefits from a massive score. John Williams tunes blare overwhelmingly, throwing us instantly into larger-than-life mode as each of the names thuds majestically onto the screen. And what names they are, right from the amazingly overpaid Marlon Brando (receiving $4 million for 10 vital on-screen minutes) to the now-iconic Christopher Reeve. And then, the big one: Mario Puzo. Yes, story and screenplay by the man who wrote Godfather! And directed by The Omen's Richard Donner. By the time the mega credits (the sequence costing more than most films made back then) come to a close, we're hooked and sitting in awe.

The film opens on the planet Krypton, where Jor-El (Brando), one of the galaxy's premiere minds, is convinced his planet is doomed. Kryptonian intellectuals resist this firmly, but, unable to succumb completely to their foolishness, he sends his young son Kal-El to earth, in a spaceship packed with extreme wisdom. Knowledge and power are represented by shards of crystal in the glassy environs of Krypton. The art direction is staggeringly inventive. The film did have a mammoth budget, but the relatively basic special effects of the time are completely overshadowed by superlative art direction. The settings are ingenuous, the lighting striking. Watched today, the film still stands tall and epic.

Kal-El lands in a deserted field in Smallville, USA. The Kents, a farmer family who call each other Ma and Pa, find him, cherubic and naked, and are entranced. They're also kinda stunned by seeing him effortlessly lift their tractor into the air. Martha and Jonathan decide to adopt the child, naming him Clark. He kicks a football into orbit after smiling at a completely irrelevant Lana Lang. The film follows the dynamic of the original Superman mythology, which is why Lois Lane is much younger than Clark and Jonathan Kent (a more constant presence in Superman's life in post-1980s comics) dies when Clark is still a teen.

Finding out the truth about his origins, Clark heads to the North Pole and finds himself the crucial Fortress of Solitude, a crystalline palace where Jor-El speaks to him and dispenses counsel. Clark's education begins here.

Metropolis seems right for his graduation. Clark Kent stands in the middle of the Daily Planet newsroom, surrounded by bustling reporters in suits and the clackety-clack of typewriters. Kent, a goody-two-shoes klutz, doesn't leave the finest impression on the wanna-win-a-Pulitzer-tomorrow star reporter Lois Lane (Margot Kidder), but editor Perry White (Jackie Cooper) likes his punchy prose style. To be fair to Ms Lane, the geekily bespectacled and consistently awkward Kent does come off as extremely worn, especially when starting his job by asking for money to be sent to his 'sweet, silver-haired old mother.'

And that's where the importance of being Christopher Reeve comes in. Other superheroes have an edge, a dark streak, a Shakespearian conflict, and a coolness that makes them captivating. Superman's as apple pie as can be, and playing him is thus quite an assignment. Reeve is incredible as he manages to pull off the balance between believably noble and good-natured dweeb. The actor brings truth to trite, rattling off lines with disarming sincerity and a twinkle in his eye.

The first time he rescues Lois Lane -- as she dangles from a helicopter perched on the edge of the Daily Planet building -- is a masterstroke. Clark sees Lois and reacts, and comic book clich� is avoided superbly as he looks around for a phone booth. He finds, instead, more modern half-covered kiosks obviously unsuited to his costume change. Kent glares and, ripping his shirt open to expose the S, rushes through a revolving door and emerges as [insert fanfare] Superman! Supe swoops up, grabs Lois with one arm and, before grabbing the chopper with the other, tells the startled journalist not to worry. 'Easy, miss. I've got you.' Wide-eyed Lois is justifiably incredulous: 'You've got me? Who's got you?' This is blockbuster movie magic.

Lois is a great character, but not handled expertly enough. She can't spell, which is a compellingly humane touch, is very high on ambition yet completely trivializes her conversation with Superman, something Perry refers to as 'the biggest interview since God spoke to Moses.' Ms Kidder does a fine job fainting, but, to be a really good Lois, she needs to be a lot more forceful and striking -- her character is nuanced thus in the start but weakens progressively -- and I'd personally say she should have been a good deal more irresistible, visually speaking.

The bad guy is Lex Luthor, and he provides the quotable insanity. Gene Hackman goes camp in this outlandish version of Luthor as a power- (and real-estate) hungry megalomaniac with wealth and resources ludicrous enough to throw logic to the winds -- something we aren't used to in this age of gritty superheroes. He lives in a strange underground lair, can buy up anything he wants, chances upon the concept of Kryptonite with inexplicable ease, and has an amazingly outfitted and extremely buxom assistant. Yes, that is indeed the life we all want.

After a superbly explained origin story, the plot device in the third act seems contrived and peculiar, and the end itself is quite a stunner. But, it works. Lois' death is decidedly unexpected and painful the first time we watch the film, and -- on a certain level, thanks again to the great Mr Reeve's histrionic abilities -- we feel Clark's hurt.

But then comes the convenient, ridiculous twist. Superman furiously spins the earth around, reversing its rotation rapidly, and turns back time in the process -- turning it a couple more minutes could save Pa Kent, maybe? -- to save Lois' life. It's unmitigated hogwash, but, by then, we've completely bought into the legend. We're rooting for Supe.

Truth, justice and the American way? Sure thing, Mr Superman. You've just taken us really up, up and away.

The Superman blog: Counting down to Superman Returns