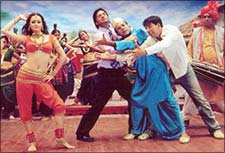 Baburao, a Marathi garage-owner as bespectacled as can be, keeps two lodgers. Raju, too smart for his (probably borrowed) shoes, is a lying rogue, while Shyam's a naive innocent born into great debt. Their volatile personalities clash to great hilarity until suddenly, one day, the phone rings...

Hang on. Isn't that the first Hera Pheri film?

So, why are we still talking about it when the sequel has just been released?

You don't want to know, believe me.

Really? What about the three characters? Aren't Paresh Rawal [Images], Akshay Kumar [Images] and Sunil Shetty worth even a bad plot?

No, they can't save this catastrophe. Plus, they're made to overact. Constantly.

Starting from a miscast Diya Mirza [Images] gyrating to a very desi item number, there is nothing in Phir Hera Pheri that goes right. In the fantastic first film, our protagonists ended up -- after much cheerful tomfoolery -- making a bundle. This film opens with them living large -- unrealistically large, beyond any conceivable proportion, in terms of the money they are said have, but come on! We haven't come to the theatre looking for realism, so let's not nitpick. 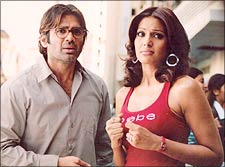 Anyway, the film opens and our wealthy protagonists are merrily overspending. Baburao's thrown into flashy kurtas and golden spectacle frames, Raju likes his shirts loud, and Shyam's trying to look natural standing next to sportscars. All's well? Not quite. Paresh, Akshay and Sunil are decidedly overplaying their roles, exaggerating their gestures and expressions, and hamming it up. Well, maybe we just need a little time to get used to them. And it'll get better in a while.

But, no. If anything, things constantly slide downhill in this ridiculous, three-hour torture-fest where characters insignificantly come and go, each seemingly crucial to the plot. The plot, by the way, is moronically ripped off from Guy Ritchie's magnificent Lock, Stock And Two Smoking Barrels, and fans of that film must be physically restrained from attacks of ultraviolence aimed at Neeraj Vora, the writer and director of this embarrasing sequel.

The problem isn't just with the rip-off; it's the ridiculous manner in which a brilliant script has been 'borrowed from' to concoct absolute tripe. The final scene -- a frame to frame rip -- is so badly handled, it hurts.

Before the film released, I had apprehensions regarding the number of characters added to the cast. I felt each actor would be crowded into unnecessary scenes and given a share of screentime, thus making the film plod painfully. Turns out I had nothing to worry about. Bipasha Basu [Images] and Rimii Sen play completely irrelevant characters -- Bips is a bardancing (in mid-afternoon, do note) swindler and Rimii plays Bollywood's tragic-sister cliche -- and are constantly vexing, making it impossible to understand why our heroes would fall for them. Then again, hardly anything our heroes do makes sense.

As for the rest of the cast, they are reduced to absolutely nothing. Johny Lever gets a few hackneyed lines, but Sunil Pal doesn't speak a word, like a few of his nameless Great Indian Comedy Show brethren, visible among the extras. Rajpal Yadav is one of the most talented sparks out there right now, but if he continues to play gullible/furious/helpless characters in every film, we're going to get tired very soon -- just like we do of PHP's grossly overdone gags: even if some are not so bad to begin with, the director persists in stretching them far beyond an acceptable limit, making the film exhausting to watch. 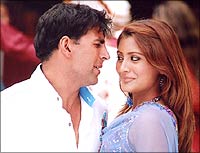 Anyway, falling for a mad get-rich-quick scheme, our boys gamble it all -- and lose, big. More so because they invest everything they have and a pile of borrowed money. Enter stuttering warlords, drug dealers and black marketeers, all in a vicious cycle of seemingly unending slapstick. By the time we hit intermission, our trio has hit upon a scheme to make more money, and the second half is, as a friend describes it, 'that trademark Priyadarshan-style chase.'

Which is exactly the point. This isn't a Priyadarshan [Images] film, and it shows. Somehow, that director -- despite often faltering -- manages to make a certain kind of comedy work, most of the time. Hera Pheri was brilliant, and Priyan directed Akshay and Paresh superbly in Garam Masala [Images]. Writer Neeraj Vora doesn't get a grip of helming this overambitious film, and we end up with a grossly disappointing sequel -- a Priyadarshan film minus the director's deftness.