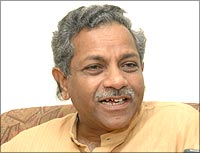 It has been a long gap for Shaji N Karun too. In an exclusive interview, he tells us more about the film, and why he wanted Dixit for the role of a Maharashtrian model.

The woman who modelled for Raja Ravi Varma was Maharashtrian. Is that the only reason you wanted Madhuri Dixit for the film?

The most important aspect of my film is the relationship between the model and artist, which is platonic. And it is only if I get extreme shades of performance from the model that I can do justice to the quality of Ravi Varma's paintings. Whether it is Saraswathi, Lakshmi, Damayanthi or Shakuntala, there is expression in the stillness and silence of the paintings. To get expressions in silence, you need a very good artiste, which is why I thought of Madhuri Dixit.

If you notice, all characters painted by Ravi Varma are mature. More than that, the woman is responsible for the images of all goddesses we see today. I also see the quality of a mother in all his images, which you will not get from an immature face.

Why did you name the film Suryamukhi?

The relationship between the sun and the sunflower is well known. At the fag end of the day, the flower withers in the heat of the sun. It follows the sun from morning till evening. The story of this model is similar. She stood by the artist throughout, though she was daunted by his fame, name and personality. In the end, she runs away from him.

The irony of the story is that Ravi Varma was forced to do nude paintings to save his printing press, and the model is the same person, the woman who modelled for the goddesses. Without questioning him, she used to agree to whatever he asked. When religious fanatics filed cases against him for painting the same woman in the nude, she ran away from Mumbai (then Bombay). It is another matter that he argued his own case and won.

How does the film begin?

It starts with the woman running away from Bombay to her lover. During that journey, she looks back, and the film is from her point of view.

I am depicting only six years of Ravi Varma's life when he was in Bombay. He paints the goddesses, Bombay is affected by plague and he then paints her in nude. More than a biography of Ravi Varma, it is a depiction of a small part of his life. But those years are enough to know him as a person. As I tell his story through the eyes of this model, I could create drama.

What have you named the model?

She is known by different names. I did a lot of research on her and the painter and finally decided to name her Ganga. She is the one who inspires a creator, and such creators are there in the lives of all artistes. As a filmmaker, I am also trying to know her through this film. I could not think of anyone but Madhuri in that role. I couldn't think of an alternative successfully, though Vidya Balan's [Images] name cropped up.

She wants to do just one film a year. I don't know if she had committed to anyone else. I received mail from her asking how I was going to treat the nudity. I told her that Ravi Varma had already expressed nudity. It is there for the world to see. I told her I was not making a European film; mine is an Indian film and the way of filmmaking will be Indian.

The way we look at nudity is different from how Europeans look at it. I can do with shadows, which is sufficient for me. It is not the most important thing in my film. And though the film is about the life of Raja Ravi Varma, it is the model that dominates. I also wrote to her that my film is not in the genre of popular cinema. 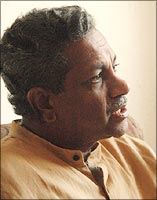 Is Ajay Devgan [Images] playing the role of Ravi Varma?

We have to match his dates when Madhuri comes to India. Bobbi (Bedi, the producer) has promised to sort things out.

Did you only think of Devgan when you decided to make a film on Ravi Varma in Hindi?

Yes, there are reasons for that too. In terms of looks, I find a lot of similarities between them. He is also a good performer. His present age also matches with the artist of the period.

You have been a maker of small films. Now, a film with two big stars in Hindi�

That was not in my mind at all. I thought of two artistes who would fit with characters perfectly. Bobbi asked me one question, 'Do you want to take your film to a larger audience? If you do, I will support it'. He then asked me if I had any problems with the images of stars. I have no such problems.

You had Mohanlal in Vaanaprastham.

Yes. Another thing is, the metro audience is very strong today. Bobbi wanted to present a different kind of film to this audience. In fact, he presented two films at the Cannes [Images] film festival market. One was my Suryamukhi, the other was Mani Ratnam's Guru. The response there was very positive. Many showed interest in Suryamukhi. Like Chinese films, we can also break the barrier and reach a wider international audience.

You spoke of today's metro audience. It constitutes a young group whose tastes and pace are different. Does that mean this film will be different from your earlier work?

As years go by, as you grow as a filmmaker, the craft of filmmaking or storytelling has to change. We have to move ahead. As a filmmaker, I have to think of the audience I am addressing. If you look at award-winning filmmakers at Cannes, you will see that there is a change in their style.

You once said that advertisers rule today's world. Looking at it from that angle, if you market a product properly, it will also reach people.

That is where Bobbi's strength lies. He knows the market. Until now, all my films were noticed only because they were discovered at Cannes. When Cannes said yes, my films were accepted here.

When your first film, Piravi, was invited to be shown way back in 1989, nobody in India knew about it. Today, there is a lot of hype about the film festival at Cannes. Do you feel your achievements happened a bit ahead of the times?

In 1989, Piravi was shown there. But I could present my second film Swahm at the competition section in 1994. I was also invited to present Piravi at the competition. As I had no idea of how to go about it, I asked NFDC. They advised me to send my film to Locarno, from where I also received an invitation. That was one of the biggest mistakes I made. Because I sent it to Locarno first, I could not enter Piravi in the competitive section at Cannes. That year, they had decided to give the award to a debutant filmmaker. The film that won was Sex, Lies and Videotape. I still regret that decision.

But, to get selected for the competitive section at Cannes is, in itself, a great achievement for any filmmaker. They select only 20 films in a year, that too from 3000! Swahm was one among the 20 in 1994.