He may be, depending on your point of view, the best or worst pirate in history, but there is no doubt that he is among the most entertaining (and fashionable).

Yes, Johnny Depp [Images] is back for another turn as Captain Jack Sparrow in the soon-to-be-released Pirates of the Caribbean: Dead Man's Chest, the second installment (of three) in the rollicking adventures of the dandy, rum-loving pirate and his unlikely allies, the idealistic Will Turner (Orlando Bloom [Images]) and feisty Elizabeth Swann (Keira Knightley [Images]).

What better time then to have a look at the fact behind the fiction and find out if Hollywood's most dashing pirate could really have cut it on the high seas.

Did the pirates of history wear earrings and make their victims walk the plank?

Did they really obey the pirate code ("more a set of guidelines") that played such a key part in the plot of the first Pirates film, The Curse of the Black Pearl?

Peter Twist, an expert on 18th century history and the historical and technical adviser on Pirates of the Caribbean: Dead Man's Chest, answered our questions about the history's pirates, their Hollywood counterparts, and the differences between the two.

Pirates may be notorious for being bloodthirsty and lawless, but, like Captain Jack and Captain Barbossa in The Curse of the Black Pearl, they still lived life aboard ship according to a strict set of codes. Before setting sail, crews often signed a contract establishing the division of booty and compensation for injuries sustained in combat (800 Pieces of Eight -- Spanish dollars -- for the loss of a limb). 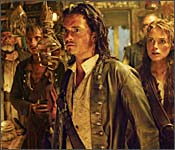 Unlike the regular navy, pirate ships often elected their captains (and replaced them mid-voyage if they fell from favour). Punishments were clearly defined and harsh: smoking in the hold without a cover on your pipe could get you forty lashes; for planning to desert his ship a pirate could expect to be marooned on a small island with one flask of water, a bottle of rum, one gun and one bullet.

Says Twist: "The captain and crew were more or less equal to one another. The code, which would vary from ship to ship, would cover everything from dividing up the treasure, sort of like today's profit-sharing schemes, to general standards of behaviour. Some ships were quite puritanical: No gambling, no drinking, etc, etc."

The Skull and Crossbones

"Pirate flags in general were either red or black," says Twist, "and they play a significant role in Dead Man's Chest."

Pirates really did fly the traditional Skull and Crossbones too (as does the Black Pearl) although there were many variations on the best-known pirate flag and its origins are unclear.

"The death's head or skeletons or the devil were very common images on flags," says Twist. "Basically anything that would let intended victims know that something bad would happen to them if they resisted."

When they weren't flying the Skull and Crossbones, pirates weren't averse to flying the Union Jack or French or Spanish flags to suggest friendly intentions as they approached their prey. 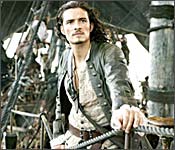 "The real-life Captain Kidd famously buried treasure when he knew he was going to be tried as a pirate," says Twist.

"But basically pirates would spend their money as they got it by going into the nearest port and drinking it all away. Typical pirates weren't usually lucky enough to get their hands on much gold or silver either. They'd take any ship that they happened to come across and it might be carrying some less glamorous cargo, like food supplies for example, so they'd just take what they could."

Between groceries and buried treasure however, Hollywood has usually gone for the buried treasure. As for the final resting place of Captain Kidd's loot, it's still to be found.

Just like Captain Jack, real-life pirates and sailors did wear earrings, though not just to look dashing. Back in the 17th and 18th centuries it was generally believed that piercing the ears with silver and gold improved one's eyesight (oddly enough contemporary scientific studies -- and acupuncturists -- have suggested there may be some truth to the idea).

"As for their clothes, pirates wore what they could get their hands on," Twist explains. "If there was a high-born person onboard a ship they captured they'd just help themselves to their clothes. So if they were somewhat extravagant dressers, like Captain Jack, they'd have plenty of opportunities. There was a real-life pirate called Bartholomew Roberts who was renowned for his fine clothes."

"There aren't any hooks or peg legs in Pirates of the Caribbean," says Twist, "but usually Hollywood can't resist them."

The idea of pirates using hooks to replace missing hands became a stereotype after the success of the fictional Peter Pan, while pirates with peg legs were popularized by Robert Louis Stevenson's classic Treasure Island.

The majority of real-life pirates who lost hands or legs in combat probably died of a subsequent infection (pirate ships didn't have doctors). The survivors were often put to work in the ship's kitchen.

"People with missing limbs wouldn't have been much use in combat," Twist explains. Meanwhile, Depp-fans will recollect that he played Peter Pan creator J M Barrie in Finding Neverland.

"Pirates would bathe in seawater," Twist explains, "but they certainly weren't what we'd call clean by today's standards."

Fresh water was a luxury on a ship and wouldn't have been used for washing. There were generally no toilets onboard either (just a hole in a plank). The dirty water that sloshed around at the bottom of a ship (the bilges) gave off the odour of rotting fish and the livestock kept onboard didn't help matters either.

Parrots on the Shoulder

"Pets were popular on ships but it had to be something that wouldn't need too much care or food," Twist says.

"Barbossa's monkey and the parrot who talks for the mute in The Curse of the Black Pearl would live on table scraps, so are probably quite typical."

Still, a parrot on the shoulder would be a little messy and during lean times at sea a parrot might well substitute for a chicken in the cooking pot. More common and unwanted shipboard companions were rats, fleas and poisonous spiders. 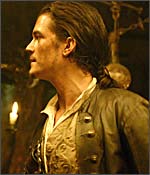 As Twist explains, being a cook onboard a pirate ship was a lowly position often given to a crew member no longer fit to fight. The reluctant chef didn't have many ingredients to work with either: Usually hard crackers made of flour and water and some dried or salted meat.

Cattle, sheep, chicken and pigs would be brought on board at the start of journeys to provide some fresh meat, as would fresh vegetables, but, as Twist points out, they wouldn't last for the length of an entire voyage.

Surprisingly enough, tea and coffee were drunk aboard pirate ships. But, like Captain Jack, most preferred rum.

'Welcome to the Caribbean, love,' says Jack in the first film, proffering a bottle of rum to Keira Knightley. Small amounts of rum, or other spirits, were often added to the stale and filthy water on board ship to take away the taste.

A large amount of rum was an antidote to boredom and the pirate's tough life. "One famously unsuccessful pirate captain, Jack Rackham, was actually captured because his crew was too drunk to fight," Twist says.

Bartholomew Roberts, the famous teetotaler pirate, was definitely the exception to the rule.

Walking the Plank -- as Elizabeth and Jack do in Pirates of the Caribbean: The Curse of the Black Pearl -- was probably not as common a form of punishment among real-life pirates as it is in Hollywood.

On the whole pirates probably preferred the swifter and simpler method of the "heave to" -- simply tossing their unfortunate victims overboard -- or came up with things much grislier than walking the plank.

"Often pirates would consult with the crews of the ships they captured and if the captain had a reputation for being brutal, they'd come up with some truly nasty punishment for him," Twist explains.

Whether a real life pirate ever said, 'Shiver me timbers' is unclear (it's the parrot's line in The Curse of the Black Pearl).

But like all sailors of the time, Twist explains, they did actually call non-seafaring folk 'landlubbers'; they did 'swab' (clean) the deck and drink 'grog' (rum mixed with water).

'Davy Jones' was sailor slang for the evil spirits that lurked in the sea. 'Davy Jones' Locker' was the ocean floor.

In Pirates of the Caribbean: Dead Man's Chest, Davy Jones is an actual character, played by Bill Nighy [Images].

"Virtually all pirates that were caught were hung," Twist explains.

British maritime law ranked piracy, along with desertion and mutiny, as the most serious crime a sailor could commit. A condemned pirate was to be hanged within ten days of being found guilty, the only hope of a reprieve being snitching on one's former crew members, convincing a judge you had been forced into piracy against your will, or, as in Captain Jack's case, making a daring escape. 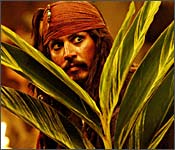 "I think the single biggest inaccuracy in Hollywood pirate movies," says Twist, "is that pirates were always spoiling for a fight. Pirates were essentially just after the money, so the last thing they wanted to do was actually fight with another ship and risk damage to their own ship or being injured or killed."

Typically a pirate ship would come alongside its intended prey and fire a warning shot in the hope that the other ship would surrender without a firing a shot.

"And that's what usually happened," Twist says. "People knew that if they resisted they'd be killed. The Pirates of the Caribbean films and Captain Jack are much more realistic in that respect. Like most real-life pirates, Captain Jack enjoys his rum and has an eye on the main chance, but he's not going to fight unless he really has to."