Weaving comical plots around a handicap appears to be the latest mantra up for adoption by formula-loving filmmakers. Take Pyaare Mohan, Tom Dick and Harry [Images] and Chup Chup Ke [Images] as examples! Now, Golmaal joins the bandwagon.

Here you have an elderly, blind husband and wife (Paresh Rawal [Images] and Sushmita Mukherjee) living in a carrot-coloured mansion. They await the arrival of their only grandson, Samir, settled in the US.

Laxman reluctantly agrees to play the US returned grandson, while Gopal becomes his voice. Madhav and Lucky are mute spectators to this con show. Confused? That's the idea. To add more mischief to the muddle, director Rohit Shetty introduces a romance angle with babe-in-neighbourhood, Nirali (Rimi Sen [Images]). One look at a towel-clad Nirali (embodying the clich� of a stereotypical, dim-witted, vanity personified, smiling, dancing Hindi film heroine) leaves the foursome hyperventilating.

While the four are busy wooing the friendly neighbour simultaneously, a local hard-of-hearing goon, Babli Bhai (Sanjay Mishra � the actor was a target of Bunty and Babli's cons in the memorable Ramba ho sequence) sends off his dense henchmen (Vrajesh Hirjee, Anupam Shyam) to steal a hidden treasure chest in the bungalow.

Given that Neeraj Vora is behind the yarn, all trademark Vora-isms pop up in the screenplay. Opportunistic characters, bird-brained villains, pretty-looking jobless heroine, loads of pot shots on the film industry and lastly � no real story.

You'll hear lines like: "Tum [Images] wapas India kaise aa gaye? Woh maine Swades [Images] dekhi thi (What made you return? Oh, I saw Swades)" or Arshad Warsi spoofing Rani Mukerji [Images] in Black, with the film's theme playing in the background only to snap, "Yeh kya hum log Black Black khel rahe hain? (What's this? Are we playing a game of Black-Black?)" Ashutosh Gowariker and Sanjay Leela Bhansali [Images] might object but the audience, I noticed, was in splits.

Arshad Warsi, in contrast, looks secure and chipper, mouthing silliness with carefree conviction. Tusshar Kapoor's character is a mute in every sense of the word. He doesn't register so much but gets to be the scene-stealer in one shot where he threatens to beat up a baddy while mouthing gibberish. It is Sharman Joshi who is the real star of the enterprise. If his scaredy-cat act went overboard in Rang De Basanti [Images], it blends perfectly with the screwball flavour of Golmaal. 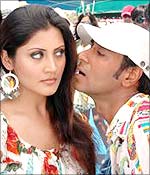