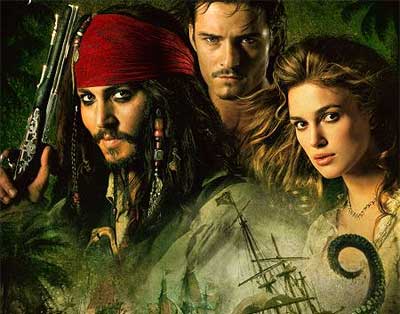 Spider-Man has lost to a pirate. The 2002 film, which took in a huge $114.8 million in its first three days of release, has had its record broken by a film about un-dead sailors and bottles of rum.

According to a report in the Los Angeles Times, the top spot now belongs to Walt Disney's [Images] much-hyped adventure sequel Pirates of the Caribbean: Dead Man's Chest, which raked in an estimated $132 million in the US and Canada [Images] over the weekend.

It's the kind of money that's bringing back a lot of smiles to film industry executives. They did have a poor 2005, after all, and this year has seen one big money-gatherer after another. So, yes, it's a turnaround, and all is right with the world.

Starring everyone's favourite actor Johnny Depp [Images] as boozy pirate Captain Jack Sparrow, Pirates of the Caribbean also broke the single-day record set by Star Wars III: Return of the Sith a year ago. While the latter took home $50 million in ticket sales, the former scored $55.5 million! There were sold-out shows everywhere, and a whole lot of happy fans dressed in pirate regalia. The film also became the first to cross the $100-million mark in two days.

Not so long ago, executives were beginning to worry about the future of the movie business. Not any more. 2006 has been very good to them. Figures still aren't as good as those set in 2004, but there's time to set that right.

Pirates of the Caribbean looks set to become the year's first $250 million hit. None of the huge releases before it -- Superman Returns, X-Men: The Last Stand, The Da Vinci Code, Cars -- have reached the mark, although each has crossed a cool $200 million.

Surprisingly, the critics aren't very pleased. The new pirates movie has been compared unfavourably with the original. Then again, The Da Vinci Code was panned, but people still flocked to movie halls for a look.

Disney knows it has a winner on its hand, and plans to release Pirates of the Caribbean: At World's End next year. There may even be a fourth film, but the company hasn't commented on the possibility.

It's all a far cry from the scepticism with which an announcement of the first film was received. Depp's character based on Rolling Stones guitarist Keith Richards has been much loved. The first film earned $654 million worldwide, and the sequel � which hits Indian screens on July 21 -- shows signs of being a bigger winner. Polls, so far, have ranked it as highly as its predecessor.

And no, there are no major competitors threatening to dethrone it anytime soon.