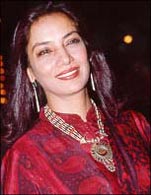 It is rare for an actress to be recognised as one of the best of her time even as she continues to churn out a prolific output. Shabana Azmi [Images] is one such woman, who continues to make films relentlessly.

The actress-cum-activist will be seen next in Aparna Sen's 15 Park Avenue, hitting theatres on January 6.

On Wednesday, Shabana chatted with rediff readers about everything from A R Rahman's music to working with Smita Patil.

Here are some excerpts:

amitp : Shabanaji aapsa actor aaj kal kyon nahi aata ? you are all time beautiful for me .... no one is as fresh as u ... even today
Shabana Azmi Chat : Thank you for the compliment. But I think actors like Tabu [Images], Konkona Sensharma, Kareena Kapoor [Images], Rani Mukerji [Images] are all extremely good at their work. But do watch my latest release Aparna Sen's [Images] 15 Park Avenue being released all India on January 6.

sam : How r u.Happy New Year to u and Your famliy
Shabana Azmi Chat : Thank you. Wish you the same.

vinay : Hi Shabanaji Your acting is so good and I like you
Shabana Azmi Chat : Thank you. It's encouragement from people like you that gives me the courage to take on parts that are off the beathen track. Please watch my latest film Aparna Sen's 15 Park Avenue that is being released all india on January 6.

seerla : hello maam....I am a great fan of yours and I liked your acting the most in Godmother....Please tell us all about your favourite role so far?Can I expect you to act for more number of years in the future
Shabana Azmi Chat : Thank you. My latest film Aparna Sen's 15 park Avenue is being released on January 6. It is an emotional story about two sisters being played by Konkona and myself. It is a wonderful role. I hope you grab the first day's first show.

Shridhar : Hello Shabanajee, what do u think about your political and social responsibility and do you ever feel that you have gone a bit far with your advocasy for some social causes?
Shabana Azmi Chat : Hi This is Shabana Azmi here. Wish you all a very happy New Year. Now coming to your question. I was raised in an atmosphere in which my parents noted Urdu poet Kaifi Azmi and celebrated stage actress Shaukat Kaifi believed that art should be used as an instrument for social change. It was inevitable that I would end up being involved in issues that are close to my heart whether it is women empowerment, rights of minorities, rights of the slum dwellers and against religious fundamentalism of all hues.

anoopsaxena : Hi Ms Shabana, good afternoon and a very happy new year. While watching a movie, most of us mere mortals tend to associate good acting or bad acting with what we like. The thought that an actor does what is required of the character is not even considered. I find this true even in the case of most critics/reviewers. Is this something that I have just conjured up or as an actor do you think it is true? That what might be considered overacting might be something that is required sometimes on the screen because the character demands it and subtle, though nice, may not be the flavor needed? I think I am partly driven by "Black" and "The scent of the woman" but not necessarily by only these two movies. And please please do tell Javed uncle, I am a huge fan of his writing as I was/am of your father's. --- Anoop Saxena
Shabana Azmi Chat : That's an interesting question. Most often, good parts are associated with good acting. Quite often, performances that are quiet or small in length remain unnoticed. That's why I was very gratified when I won the National Award for Mrinal Sen's Khandhar in a year that I was competing with myself for Shyam Benegal's [Images] Mandi in which I had the more dramatic role.

SP : Hi Shabana ji,I had seen u talking too much for women's conditions in india and doing some charactor too in indian movies, I would like to know as a so called indian politician what is u r contribution to this issue
Shabana Azmi Chat : I believe that no country can claim to have achieved progress only on the strength of its GDP. The true yardstick of a nation's progress is to be measured by the degree of empowerment of its women. In Parliament, I have worked actively on women's issues particularly on their education and health. Consciously, I work in films that promote the image of women as strong and independent.

madhura : SHABANAJI ARE YOU A GOOD SINGER TOO?I HAVE HEARD YOU HUMMING A RAGA ON RADIO MIRCHI
Shabana Azmi Chat : I have never learnt classical music but have been told that I have a tuneful voice. I had to wprk very hard to get the Carnatic music Swarams right in Morning Raga and my biggest compliment came when Pandit Ravi Shankar, Hariharan [Images], Shankar Mahadevan [Images], Alka yagnik and Anup Jalota said they were completely convinced that I sounded like a Carnatic singer. Incidentally, Morning Raga's submission for the Oscar nominations has been accepted and I am thrilled.

Jaiy : Hello Ma'm, You have worked with some of the best and most talented actresses in the industry. One of my all time favourite is you and Smita Patil. Could you please tell your rexperience working with her.
Shabana Azmi Chat : We did many meaningful films together. My favourites are Arth, Mandi and Nishant. She was a very talented actress and extremely photogenic. It is a pity she passed away so soon. I have a very good relationship with her parents and sisters who treat me like her daughter. I miss her.

Atul : what is true meaning of religion for you
Shabana Azmi Chat : Since India calls itself a secular democratic republic, it is essential that the state distances itself from religion. Religion is a purely personal matter and each one should be free to practise it in a manner that encourages peaceful coexistence because ultimately all religions propagate love of mankind and brotherhood.

Dhaval : So wats ur openion about ur new film 15 Park Avenue? you are in which role?
Shabana Azmi Chat : I play Anu, a modern, urban woman, intelligent, educated but always pressured for time. she is the caregiver for the family because her younger sister played by Konkona is a schizophrenic. When Javed saw the film, he sobbed like a baby. The film has very good performances by Waheeda Rehman [Images], Konkona, Shefali Shah and Rahul Bose [Images]. Whether I am good or not, is for the audience to say.

a : HI SHABANA!WHAT ARE YOU DOING FOR THE UPCOMING ACTORS FROM PARALLEL MOVIES,ITS REALLY SAD TO SEE YOU SERVING AS A POLITICIAN BUT NOT AS MOTIVATOR FOR ARTS MOVIES,PLEASE ANSWER ME
Shabana Azmi Chat : I completely disagree with you. I have a record as having worked with probably the largest number of first time directors and a whole host of young actors.

kara : Could you comment on the current state of Indian Cinema?In your view, has Indian Cinema matured or degraded?
Shabana Azmi Chat : I think this a very exciting time in Indian cinema. The advent of multiplexes has led to a whole host of independent films that do not have to cater to the lowest common denominator. As an actor, I have been very lucky because the best parts have come to me in the last 10 years. Hindi cinema is becoming a force to contend with globally. My latest film Aparna Sen's 15 Park Avenue which is being released January 6 all India will be liked by international audiences as well.

meetu : shabanaji what other coming up projects are there of yours???
Shabana Azmi Chat : My latest release is Aparna Sen's 15 Park Avenue which is being released all India on January 6. Please do see it. At present I am working in J P Dutta's Umrao Jaan [Images] playing the part of Khanum Jaan which was played by my mother Shaukat Kaifi 25 years ago in Muzaffar Ali's version of the same.

kanchanaindia : Hello mam, happy new year?You have been very daring in your films as well as in real life, how do you cope with the society?
Shabana Azmi Chat : I grew up in an atmosphere where I was encouraged to speak out against injustice and exploitation. Sometimes it becomes necessary to take bold stand but I don't rush into things without giving considered thought. I have the courage to speak up for my convictions because I have the support of my family, friends and thousands of people who are working against injustice.

bhaskar : Are you involved with theatre regularly?
Shabana Azmi Chat : I have just completed a 7-week stint at Harold Pinter's English play Betrayal with The Singapore Repertory Theatre. I have also done The Waiting Room for the prestigious National Theatre in London [Images]. I am continuing with performances of Tumhaari Amrita with Farook Sheikh. Javed Akhtar and I are also doing Sheeshon Ka Masiha directed by Ramesh Talwar which is based on the life and times of famous Urdu poet Faiz Ahmed Faiz.

ajit_123_onwards : this will b the last time.do u dislike the term bollywood?do u find it demeaning?if yes don't u think we should supply a better word &then complain abt the original word?how abt HFI(hindi film industry)?
Shabana Azmi Chat : I dislike the term Bollywood. I find it pergurative. I have always used the Hindi Film Industry to refer to Hindi films.

parker : Asked by neo : Hello Shabana.. wishing u a very happy new year.. i have seen many times on t.v and read in papers..about your firm support for slum dwellers. Even i sympathise for them..but just supporting them on the cost of city development and preventing airport development and so on.. Is this that logical..kindly answer ..thanks for giving me an audience.
Shabana Azmi Chat : Development of the city cannot take place unless all its citizens including the slum dwellers are accommodated. Sixty percent of Mumbai's population lives in the slums and they occupy only 13 percent of the city's land. Unless the govt reserves land for the housing of the economically weak sections, slum dwellers will be forced to settle wherever they find open space. They should definitely be removed from the hazardous places like airport but they must be provided the alternative land with the necessary infrastructure so that you do not create a worst slum out of an already existing one. Presently, Nivarahakk, a slum organisation I work with is building homes for 18,000 families that were displaced from the Borivli National Park. This is a tripartite agreement between the govt of maharashtra, nivarahakk and a private builder. When it is completed, it will be the largest rehabilitation project not only in India but allof Asia. That is the kind of redeveloment we need rather than the f

harsha : hey shabanaji, wht were the emotions running thru ur mind when getting ur head shaved for water? did u ever feel like crying?? wud u do it again??
Shabana Azmi Chat : I felt it was essential for the part. Of course, didn't feel like crying. I used to go to Parliament bare head without covering it. A lot of people working with cancer patients started inviting me for their events to encourage patients undergoing chemotherapy. I was glad to doi a service to them.

bhupendra : which movie of urs u like most?
Shabana Azmi Chat : Difficult question to answer. But I think i have made the least number of mistakes in Deepa Mehta's Fire.

CHINJU : CAN YOU TRY SOME MASALA ROLLS,BECAUSE YOR ARE MY ALLTIME DREAMGIRL.
Shabana Azmi Chat : Produce the film and I will do it

sureshreddy : Hi Shabana madam, what is your feeling that your film Mornig Raaga..nominated to Oscar?
Shabana Azmi Chat : I am delighted. I always believed in the film and am happy for the recognition.

Shabana Azmi Chat : Thank you all for chatting with me.