It has been 12 years since iconic Bollywood music composer Rahul Dev Burman passed away on January 4, 1994. But he lives on in the hearts of the innumerable fans of his creativity.

As a tribute to the maestro, music composer Anu Malik [Images] recounts the time he first met Panchamda, as R D was fondly called, and how much the master has influenced him.

I met Panchamda for the first time when I was just 17 years old. I was at a film centre to watch a recording. I have this vivid memory of Panchamda recording and Ashaji [Bhosle] singing. I can't remember the song but I remember they were top-class musicians.

In those days, before they started recording, they would rehearse. When I saw Panchamda coming out of the recording studio, I rushed towards him.

I was brash then. And I said, 'Sir namaste, how did you make Gulabi aankhen jo teri dekhi [from the 1970 movie The Train].' He told me ban gaya bas ban gaya [it just happened]. He spoke very fast and went away.

I was still waiting and the door was ajar. I peeped in.

I could see that suddenly, at the last moment, he changed whatever music he had composed and whatever his musicians were playing.

Today, I find the same trait in myself -- I change my music at the last moment if I find it is not gelling.

There is another most touching memory of him that I have. He was recording at Sunny Super Sound, and he had had a bypass surgery.

The heart and beat of RD Burman 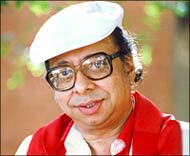 When I met him, I touched his feet out of reverence.

I saw a big cut on his leg I asked him, 'Dada what is this?'

He told me that it was for the bypass. A vein had to be taken out from his leg. I was very moved by the whole thing. I could not believe my hero, my idol, was in so much in pain.

I saw the pain of this great man.

I read his interview where he had said he had his first heart attack when he had composed loads of tunes for top producers directors and they were rejected. I saw the callousness of the industry through Panchamda.

Pancham: One of a kind!

I have a learned a lot from him, apart from the music that we grew up on. His personal life, which was quite painful, has inspired me.

I still keep on listening to his music. We all grew up on his music. I worship him.

Incidentally, when you called up, I was listening to the song Tumne mujhe dekha [from the 1966 movie Teesri Manzil] composed by Panchamda.

And when you reminded me that it his 12th death anniversary, it was a bit too much to handle for me.

He was a complete and versatile composer. He could give you an Amar Prem and a Teesri Manzil at the same breath --which, if you notice, I have done when I did while I composed Judwaa and Refugee and Virasat and Border. They are two different genres of music.

He had a lot of romance in his tunes. There was loads of magic in his music. It was zestful and youthful.

You fall in love with those tunes a million times because he made music from his heart -- the way I make it now. That was the USP of his music, which I have tried in my music -- by making melodic tunes.

I was unfortunate I never had an opportunity to learn from him. But his music was so strong that you can learn music by just listening to his songs.

He was the master. Therefore, his music is remixed again and again. Today, his music has been done to death by so many DJs. He was about a hundred years ahead of his time.

One more reason for me not training under him was that I had started looking for work myself, as I also wanted to be a composer and I was always in a hurry to do something. But I used to listen to him and that was a great inspiration.

I can't even imagine 12 years have gone by.

I didn't have a chance to get very close to him, but I know he was like a child. I know this through his music. I think both Panchamda and his father [Sachin Dev Burman] were made of music.

I was fortunate enough to compose one song for Ghatak, which he was supposed to do. I did Koi jaye to le aaye. His death really hit me. I was shocked when Raj Kumar Santhoshi approached me for Ghatak.

A tribute to RD Burman

I remember going to a music company and while I was sitting there I saw Panchamda. He saw me and hid from me -- because he had come there asking for work. That was the most painful moment of my life -- that one of the greatest composers, a living legend, was looking for work. This was just few years before his death.

He could twist tunes so well. He would pick up foreign tunes and make it his own tunes. If you remember Chura liya hai tumne jo dil ko [from the 1973 movie Yaadon Ki Baaraat], or even if he lifted from Abba, he would turn the antara [the chorus of the song] so well that it changed the whole tune. I think that is one thing that any composer can learn from R D Burman. Rather, you could say that is what I have learnt from him.

If you have to learn anything from Panchamda, it would be his sense of melody and versatility. The fact that he loved his work and could produce an inexhaustible range of melodies. And the fact that in spite of doing so many different films at the same time, he came out with wonderful music and top scores all the time.

He was very sure of what he was doing. He was not confused. He knew exactly how the introduction would start and how the mukhda [intro] or the antara would be. One should learn this clarity from him.

You can't get better than RD!

We still feel his loss. We miss his music. If Ashaji is nominated for the Grammy today, you can imagine how far ahead Panchamda was in his work and his music. He put a stamp on the industry -- he is still there with us with his last score, 1942: A Love Story.

Even though he is physically not around you can't say he is gone as his music is still around.

I would like to thank god for sending R D Burman among us -- he was one of the most romantic music composers ever.