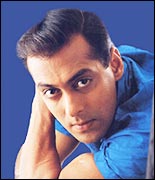 Salman Khan has been sentenced to a year in prison for killing two blackbucks.

It's not a first for the Hindi movie industry; Bollywood is familiar with actors doing jail time.

Sanjay Dutt [Images] was arrested under the Terrorist and Disruptive Activities Prevention Act in connection with the 1993 serial bomb blasts in Mumbai.

His arrest did not affect his box-office appeal, and his film Khalnayak -- which released the same year -- went on to become a huge hit.

But when Sanjay was rearrested under TADA in 1994 and re-released once again, producers would not touch him. For a while, he had to be content with low-budget films. He was almost written off because of his alleged involvement with the underworld. But things changed for him with the release of Vaastav (1999).

Another actor who did prison time was Fardeen Khan [Images], who was arrested for possesion of cocaine in 2001. Fardeen's recent film No Entry [Images] was the biggest Bollywood grosser last year.

Salman, who also starred in No Entry, has had even better luck at the box office. 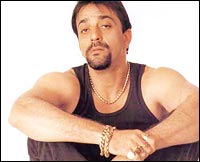 In 2002, he was involved in an alleged hit-and-run case in Mumbai. Though he denied the charge, he was sentenced to 17 days in imprisonment, and later released on bail.

His next release was Tere Naam [Images], a huge hit. Even after his alleged conversations with his then girlfriend Aishwarya Rai [Images] were made public, and his purported underworld connections splashed across newspaper front pages, Salman's star status stayed intact.

His films No Entry and Maine Pyaar Kyun Kiya were hits last year.

Fans, it seems, turn a blind eye to their heroes' brushes with the law.