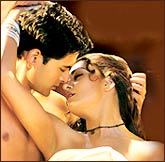 Kalpana Lajme's new film Chingaari is set in a nondescript village called Rangpur, and Lalbatti is where women like Basanti (Sushmita Sen [Images]) sell their bodies to survive.

Basanti, despite being a prostitute, is a woman with feelings and emotions like the rest of us. And she finally finds love in the form of a Chandan (Anuj Sawhney), a village postman.

When Bhuvan Panda (Mithun Chakraborty), the evil, scheming village priest who everyone fears and obeys, finds out about Basanti and Chandan, he stands in the way of love. He succeeds, and Basanti vows revenge.

The film is about exploitation, love, lust and womanpower. It's a story that has the potential to be a good art film, not mainstream Bollywood cinema in the age of the multiplex, and I must say I am disappointed.

I know you make women-centric films with a message, but do you really just want to preach, Ms Lajme?

For one, the voiceover reminds you of the television serial Mahabharat's opening: 'Main Samay hoon!'

In the intermission, there were 20 women in the washroom discussing the same things -- the lack of a commercially viable story, the film's inability to hold the audience and how they were utterly disappointed and bored with what they saw in the first half.

For two, Mithun -- clad in saffron clothes, gold ornaments and marigolds around his neck -- cuts an impressive figure as a priest, but his dialogues and acting leave a sorry impression.

'I don't write scripts for actors'

I neither felt like hating him nor was I disgusted by his character. It lacked enough negativity. If his character did anything, it bored me. To the core. 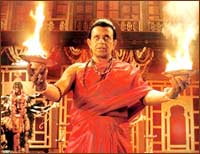 In spite of the controversy he raked up before the movie and Sushmita declaring that she will not speak to him anymore, Sawhney brings a whiff of fresh air to the film. His smiling demeanour and innocent, attractive portrayal of the village postman is worth noticing.

Ila Arun also figures in the film -- I had to go through the torture of hearing her sing -- playing a character with no recall value.

The music -- by Aadesh Srivastava -- is too slow and uninteresting. When I left the theatre, I was humming nothing.

The only saving grace of the film is Sush, who puts in a mindblowing performance. And it's her film through and through. She is the hero, the heroine, the comic relief, the baby, the mother, the friend, the lover, the goddess, the prostitute.

She is the only possible reason to watch this movie.

Dressed in backless cholis, with hair hanging till her waist, rudraksh on her neck, kohl in her eyes, red paint on her nails and lips, she looks gorgeous. Costume designer Irfan Khatri has exaggerated her sensuous appeal. And boy, has he succeeded! 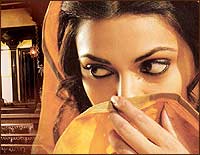 She flits through the range of emotions -- from playful, naughty to motherly; from the sacrificing, suffering, helpless girl to a woman scorned unleashing her fury -- with effortless aplomb.

From her startling 'Let jaa, Basanti aa rahi hai' to a customer, to her flirting with the postman to where she challenges the priest, one sees Sushmita at her mesmerising best.

She sizzles, captivates and completely casts a spell on the audience in the second half. Watch her banging the dhol and you'll know what I mean.

If only one could say such good things about the film.