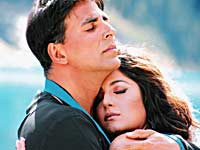 The HDKG soundtrack album starts with Tulsi Kumar's creaking voice assaulting the eardrums. Reeking of conventional gooeyness, the song Humko deewane kar gaye is good for those having problems getting some sleep.
More of this squeaky title track is hurled at you, in the form of its weepy versions.

The next song is much more listener-friendly. Okay, it's no Ada (Garam Masala [Images]) but For your eyes only packs enough punch to get you jiving on the floor. Ditto for the remix.

Sonu Nigam [Images] effortlessly conveys the feelings of a jilted lover in Bhula denge tumko sanam. This one loosely tries to imitate Tanhayee (Dil Chahta Hai [Images]) but comes nowhere close to achieving the desired effect. But the remix is rather zingy.
Thanks to Yuva [Images], the film industry has been introduced to a new word -- Fanaah. On one hand Kunal Kohli is directing a film -- featuring Aamir Khan [Images], Kajol [Images] and Tabu [Images] -- called Fanaah and on the other Sameer writes a lacklustre song with the same name.
Fancy beats and KK's verve cannot save this wishy-washy Fanaah's fate from being strictly mediocre. DJ Akbar Sami, who shot to fame with the Jalwa remixes, repeats himself in the techno treatment of Fanaah.
Mere saath chalte chalte is a qawwali number that has nothing new to offer. After smash hits like Kajra re (Bunty Aur Babli [Images]), listeners are unlikely to settle for this cheesy, garish song.