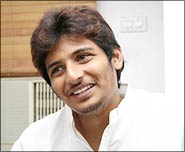 It was with director Ameer's Raam that young actor Jeeva really arrived on the Tamil film scene. Till then, he was only known as the son of well-known producer R B Chowdhary, and had acted in a couple of forgettable movies. But Raam changed all that. It was one of 2005's well-made films, and Jeeva made a mark.

His new film Dishyum is rumoured to be as offbeat and sweet. Scheduled for release on February 3, it is a love story between a film stuntman and a sculptor. The girl playing the sculptor is Sandhya of Kaadhal fame.

With two of the best films of 2005 backing these young actors, there is naturally a lot of excitement about Dishyum. The director Sasi's earlier works, Sollamaey and Rojakootam, were also highly appreciated. In an interview with rediff.com, Jeeva talks about his role, as well as his entry into films.

What was growing up as the son of a film producer like?

My father is one of the prominent film producers in the south, so, naturally, films are in my blood too. He is going to produce his sixtieth film soon. When I was young, the only functions I attended were film functions and the main thing we talked about was cinema. When you see your father collecting awards as a producer, you are naturally drawn to the same profession.

But acting was never on my agenda. I wanted to do a course in special effects and work on those lines. I even got admission to the Vancouver Film School after completing courses in web designing, multimedia, etc in India. That was when my father was planning the fiftieth film of 'Super Good Films'. When the director offered me the lead role in Aasai Aasaiyai, I accepted.

Was the role offered to you because you were the producer's son?

Not at all. To tell you the truth, I had absolutely no plans to act. In fact, I told him I didn't know how to. He convinced me he would help me perform, but I took a month to agree to the offer. I was extremely nervous on the first day of the shoot, and was pretty conscious of what I was doing for a whole week. After that, I relaxed.

Were you excited to see posters of the film with you in them?

Of course. There was a huge hoarding on Mount Road, and I stopped my bike near the poster to have a real look at it. It was very, very exciting.

It was with your third film, Raam, that you were noticed. Generally, heroes are weary of accepting such offbeat roles. What made you accept such a film?

If I was noticed after Raam, I should thank the director Ameer for that. I feel many young actors are trying different kind of films and roles. There's Dhanush in Kaadal Kondein, for instance. When Raam was offered to me, I took it as a challenge to explore the actor in me. I knew that acting as an autistic, eccentric young man obsessively possessive about his mother, would be a very difficult character to portray.

I was asked to remain blank, and it was the director who moulded me as Ram. I did a lot of Reiki and just relaxed. I did a lot of research on autism. I also met an autistic young man and observed his mannerisms. Ameer taught me to remove myself, Jeeva, from any of the characters I portrayed. The greatest high we had was the selection of Raam for the Indian Panorama at the International Film Festival in Goa [Images].

Your new film Dishyum is completely different from Raam.

I had decided earlier itself that my next film should not have any shades of Raam. Dishyum is a sweet love story about a stuntman and a sculptor. 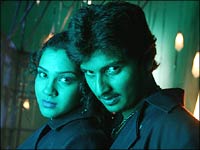 What kind of preparation did the role involve?

I had learnt kung fu for three years and, for this film, my director asked me to learn gymnastics. I trained for a few months. He said gymnastics would help me perform the stunts well.

Did you have to do any risky stunts?

The character's name in the film is 'Risk' Bhaskar! Every shot is risky, and there are a lot of stunt scenes. We were very nervous about the stunts in the beginning. I would say I risked my life in many of them.

Did it make you more aware of the kind of risks stuntmen take in films?

Of course. In fact, we had long discussions with quite a few stuntmen before we started. And, as we were shooting, the stunt directors were with me all the time. They shared a lot of things about their lives with us. That is how I came to know what they go through for a living.

Did you show the film to any stuntmen?

It was they who saw the film first!