Like the brilliant cinema he created, Hrishikesh Mukherjee's funeral at the Shivaji Park Crematorium in Mumbai was minimal and fuss-free, warm and emotional, evocative and tragic. And there was even that touch of the freakishly absurd.

The crematorium traditionally used to be a place where women weren't allowed to enter. This afternoon, it wasn't noisy, yet thronged by flashbulbs and tripods, as journalists of both sexes jostled for soundbytes. The crowd, however, was not as large as expected, and mercifully, the media at least left the grieving family alone.

Colleagues and admirers from the film fraternity hung around, talking about Hrishida and their favourite moments, reminiscing about meetings with the master filmmaker. Often did an elderly gent place his hand on another's shoulder, and recite ashes-to-ashes styled dialogue from Hrishida's films, most notably Satyakaam, apparently the director's personal favourite. Some shook their heads sadly and some smiled with fond nostalgia.

It was Raza Murad who summed it up best. The actor and his legendary baritone broke onto the screen in the director's Namak Haraam, and he choked up with emotion as he articulated his feelings. "This death has orphaned the film industry," he declared. "Yes, we are aware that Dada Saheb Phalke is regarded the father of Indian cinema, but he was a father we never saw. Hrishikesh Mukherjee was the father we not only saw, but also worked with and loved deeply."

Shatrughan Sinha, the action star still regarded warmly for his comedic saale-ghonchu turn in Hrishida's Naram Garam, agreed. "Hrishida's death signals the end of an era. I don't think this is a void that can ever be filled," he said. "He was a great personality, an unparalleled film director, and a director for the people. Hrishida was a personality who wasn't swayed by cinema's glamour and continued to make his own kind of films, films that reflected his culture and tradition. He made films for the common man, films for middle-class families."

Bollywood, however, didn't quite come knocking. The biggest superstars found their most substantial successes in Hrishikesh Mukherjee's cinema, yet Dharmendra [Images] and Amitabh Bachchan [Images] were conspicuous by their absence. Similarly, Murad noted, was the new generation of directors, who have all learnt from Hrishida. "People are busy; that's a fact," he conceded, "but if a man has spent 60 years dedicating himself to making people smile, a man who has influenced all Hindi cinema that has come after him, is it too much to ask that you take 60 minutes to offer your last respects?" 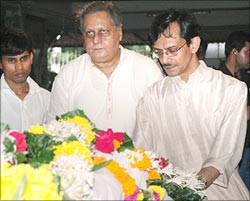 Sinha too seemed quite jaded. He spoke of Satyajit Ray's funeral, saying, "Even if a director's worth can't be measured in terms of awards, Ray won the Bharat Ratna and the Academy Award. He was the greatest director of all time. Still, I remember there were, at the most, 75 people in attendance. Perhaps it's true, even in times of death, Bollywood is obsessed with 'stardom.' Maybe because Hrishida has been inactive for a long time, they are tragically neglecting him."

And then there was the absurd. With a dark surreality echoing the director's best-scripted farces, one of his sons-in-law got his pocket picked at the funeral. A trio of policemen suddenly rushed into the crematorium, and a thickly Bangla-accented flurry of voices rushed to report the macabre crime: everyone was in white and seemed like a family member; who would pick a pocket at a time like this? It was bizarre and pathetic, and a resigned only-in-Mumbai refrain echoed across that particular corner of the hall.

"I feel the befitting tribute to a director like Hrishida," said Sinha, "would be that we should look at the kind of films he made --- the kind of language, the writing, the love of the common man he always showed -- and try to make films on those lines to keep his spirit alive. His body of work remains immortal, and this is our prayer."

Somehow, as the hall cleared and guests and TV cameras filed out, as soundbyte-hunting came to an end and the cars zoomed off, I couldn't help but feel it seemed vaguely appropriate. A traffic-halting farewell packed to the gills with A-list megastars feels too vulgar and obvious for Hrishida. This one was small, intimate, and allowed the common fan and true admirer to walk in and pay his last respects. Like Hrishida, so too the goodbye -- understated.