Mahesh Bhatt's Woh Lamhe [Images] has the tagline: for everyone who has loved and lost.

Intense relationships are a favourite theme with Bhatt; take, for example, the Bhatt-directed Arth and Phir Teri Kahani Yaad Aayi. The Mohit Suri directed Woh Lamhe, which is based on Bhatt's intense relationship with late actress Parveen Babi, is scheduled for a September 29 release. It stars Shiney Ahuja [Images] and Kangna Ranaut [Images].

If the music is an indicator to a film's success, composer Pritam hits the bullseye yet again for the Bhatts, post-Gangster [Images].

Kya mujhe pyaar hai makes for a pleasant introduction to the soundtrack. It's young, lively, refreshing and a perfect companion for a long drive. KK's wholehearted commitment to the track works wonderfully in its favour. In fact, I spy another Ya Ali style chart topper here. DJ A-Myth and DJ Kiran, thankfully, don't tamper too much with the song in its remix version. A pumped up rhythm is all they inject, allowing the inherently racy number its breathing space.

James, the Bangladeshi singer, who rendered Bheegi bheegi in Gangster, proposes a night of passion in the carefree and groovy Chal chale. 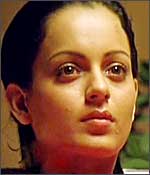 Tu jo nahin falls in the same league as Nadeem-Shravan's Saajan song, Bahut pyaar karte hain -- a sentimental cry, dripping with heavy-hearted poetry (Sayeed Quadri, in this case), and set against charged piano and violins. Newbie singer Glenn John does a decent job with the track.

Shreya Ghoshal conveys the obsessive and possessive nature of sKangana's character in the eloquent So jaoon main. Kunal Ganjawala reprises Shakeel Aazmi's beautifully penned song effortlessly. All credit ought to be directed to singer Roop Kumar Rathod, who acts as guest composer on this one. Rathod's silvery melody easily makes this the top track in the album.

Pakistani import Jawad Ahmad makes his presence felt in the laidback tempo of Bin tere. If you listen carefully, you will notice the strain for the opening verse bears resemblance to the Bas Itna Sa Khwaab Hai title track. That aside, Bin tere -- like most other songs on the soundtrack -- sounds good.