That obviously led us to the next question: Would Suchitra Sen, a recluse like Hollywood legend Greta Garbo [Images], for more than 20 years, end the mystery that shrouds her and accept the award from the President of India?

Sen's granddaughter's answer comes as a rude disappointment: "Dida won't come out of seclusion to accept the award."

But it is the Dadasaheb Phalke Award! To be conferred by no less a personage than the President, we reason. "No comment," says Raima and hands the telephone over to her mother, Suchitra Sen's only child, Moon Moon Sen. But the 49-year-old actress has nothing to add. "I don't want to talk about if Ma is going to accept the award or not," she says. 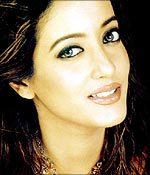 The focus then shifts to West Bengal Congress leader Subrata Mukherjee, who is said to be the Union government's emissary to persuade the actress to accept the award in person. But Mukherjee is unavailable for comment.

"The government could not have made a better choice," a close friend of the actress told this correspondent on the telephone from Kolkata, speaking on condition that he would not be identified for this report.

Like Moon Moon and Raima, he too knows for sure that "she will never ever accept the award."

"She is living in a tranquil world where publicity and the glare of flashlights do not exist. I know how hard she has worked to attain this peace of existence. She will not let it go just for an award, however great," he adds.

People living in and around Sen's posh south Kolkata home are bubbling with enthusiasm at the news. "I wish I could convince her to shake off her mystery veil, at least once. The award is not only an honour for her but for the entire city," says Anuradha Goswami, a high school teacher.

According to another neighbour, banker Mainak Basak, "It won't be proper on Sen's part to refuse an award conferred by the President of India."

Disagrees another Bengali legend, writer Sunil Gangopadhyay, a former sheriff of Kolkata, "Accept it or not, Sen is India's Greta Garbo and someone of her stature has the right to accept or refuse an award. Being someone who has grown up on her films, her winning such a prestigious award is all that matters to me. Whether she accepts it or not should not be the point of discussion."

"Sen's greatness," he adds, "must be assessed in respect to the celluloid world as it exists now. While in college, Sen was an extremely good-looking actress sans acting skills. So was Uttam Kumar. With youthful arrogance, we tended to ignore the legendary film couple. But now, as we weigh Sen against the so-called stars of today, we realise how great she was. There could not have been a better choice for the Dadasaheb Phalke Award."