This is a dodgy assignment. Imagine reviewing a horror film without giving anything away. Not really that hard if you watch your step, right? Now think of reviewing seven scary shorts, each with its own set of characters and twists where even a three-line summary of the story is bound to contain a spoiler, or at least a hint of one. So this piece you're reading now must be more overview than review, something that skirts around the stories and stays in the shadows.

It's possible I may have my facts wrong here -- feel free to write in and correct me -- but I think Darna Zaroori Hai [Images] marks a first for Indian cinema. It's our first real Portmanteau film, an anthology of stories in the same film, directed by different directors.

Zaroori features seven such filmmakers tied together by the theme of fear, each experimenting with an independent section and hoping they tie together well enough.

This is intended to create an interesting feel to the film, each director with his own style bringing an inconsistency to the film, while blending into the overall scheme of things. This difference, however, isn't as starkly visible in Zaroori, with almost all the filmmakers being Ram Gopal Varma prot�g�s, and hence obviously schooled in shadows and sound effects. 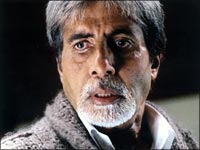 Is it spine-chillingly scary? No, but it can make you jump. Bounding with horror-film clich�s -- graveyards, rain, spooky old women, s�ances, hitchhikers -- Zaroori determinedly breaks away from Hindi film convention by giving you a twist more than you're used to, each time. The dialogues are sharp and often cheeky, and while the film is often extremely predictable once you get used to the twist-pattern (or was I just having a prescient night?), it does manage to conjure up some seriously scary moments. And can be satisfyingly abrupt.

The film boasts of an all-star cast, and they deliver, almost unfailingly. Amitabh Bachchan [Images] is simply brilliant in his part of the film, showing us, in those brief minutes on screen, what pure performance is all about. The always-natural Riteish Deshmukh [Images] balances him superbly in the best episode of the lot, obviously directed by Ram Gopal Varma. The maestro's fine-tuned hand shows impeccable restraint and great technique. (Sajid's episode comes second, in my book, but lets not begin ranking the directors here!)

Manoj Pahwa is magnificent, and it's impossible not to warm up to him. Mallika Sherawat [Images] does a strong job, and Anil Kapoor [Images] is predictably fine, not to mention hilarious. Sonali Kulkarni [Images] is given nothing, but is powerfully expressive, Rajpal Yadav simply rocks, and Makarand Deshpande proves again that we should see him a lot more often. Bipasha Basu [Images], unsurprisingly, looks gorgeous. 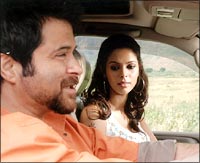 The old women, especially the genial one from the Ayurvedic Concepts commercials, the five annoying little kids (with the insane pluck only seen in horror films), and Arjun Rampal [Images] let the film down considerably. Not to mention the awful song -- though the background music sampling is authentically funny during the end credits -- and Nisha Kothari [Images]. And I personally felt the end was a massive anticlimax.

Zaroori opens with humour and normality, throws in macabre twists, suggestions that what is to fear most is fear itself, some loose ends, and even a bit of moralising. For the most part, this works. Again, this is not a hardcore horror film, and the frightening moments pass soon enough -- but the fact that the unexpected can catch you off guard is quite fun. At any rate, it's far better than Darna Mana HaiM, and most of the tripe running in theatres next door.

Even if you don't scare at all, you can rest assured that -- be it merely because of the format -- this film cannot bore you.