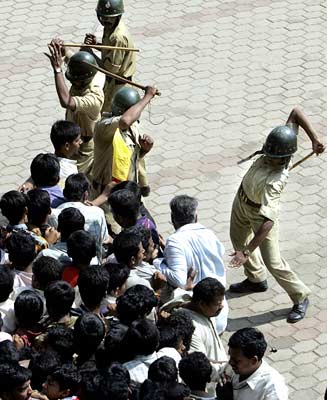 Police resorted to "mild lathicharge" and burst teargas shells near the Kanteerava stadium in Bangalore today as it became virtually uncontrollable to regulate thousands of mourners who thronged to pay last repects to departed matinee idol Rajkumar.

As emotions ran high, police had a very tough time controlling the mourners, who included a large number of women, and had to use canes and teargas shells in the process.

At least two state-owned buses were set on fire near the stadium and scores of private vehicles damaged by the unruly crowd, which also attacked the police and fought back their attempts at control.

"It was an outpouring of grief on a scale unprecedented in Karnataka's history," an official said. Government offices banks, courts, educational institutions were closed today as a mark of respect to Rajkumar. Vehicular traffic was thin on the roads, while shops and business establishments downed their shutters.

Meanwhile, Rajkumar's body is slated to be taken in a procession this afternoon to Kanteerava studios in Nandini layout area for a funeral with full state honours.