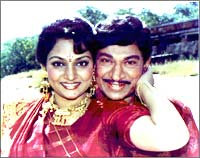 Revered as a demi-god by millions of his fans, Dr Rajkumar has never run short of either love, fame, adulation or media space in his five-decade long career. And he's been versatile throughout, playing everything from larger-than-life historical figures to common men. And he's even thrown in some James Bond-style work.

Never one to be out of the running despite his advancing years, Rajkumar's appearance on the marquee was always heralded by wolf whistles, uninhibited hero worship and mass hysteria -- even for films that hit the screen after a long hiatus. For this Padma Bhushan and Dadasaheb Phalke Award winner and the recipient of nearly nine state awards (for the best actor), 10 Filmfare awards and even a national award in the best singer category -- the title of 'Nata Saarvabhowma' (the emperor of acting) conferred by his fans, speaks volumes of the man, considered an undisputed cult figure in Karnataka.

Mutturaju Singanalluru Puttaswamayya, was born on April 24, 1929 at Gajanur, Tamil Nadu before he was christened 'Rajkumar' for the Karnataka celluloid world by director HLN Simha, who discovered the would-be-matinee idol at a bus depot and signed him as a full fledged hero for the film Bedara Kannappa in 1954. The discovery not only rewrote the destiny of the 25-year-old Muthuraj but also that of the entire film history of the Kannada film world for the next 50 years. Having inherited his theatre artiste-father Sinanallur Puttaswamaiah's acting genes, his tryst with grease-paint subsequently turned into a successful venture.

Rajkumar essayed the role of many a mythological and historical figure and carried them off with �lan, be it Bhakta Kumbara, Satya [Images] Harishchandra, Bhaktha Cheta, Bhaktha Kanakadasa, Ranadheera Kanteerava (1960) Immedi Pulikesh (1967), Sri Krishnadevaraya (1970) or Mayura (1975). His role as Babruvahana is one that has been etched forever in the memories of filmgoers.

The epithet Rajakumar sat snuggly on Muthuraj as he moved from the realm of mythological and historical films of yore to the age of neo-realism; marching along with the times; polishing his skills as he went along; marking many a milestone. His role as a village simpleton in films like Mannina Maga, Anna Thangi, Chandavalliya Thota, Doorada Betta, and Mayor Muththanna bonded him with the masses. The endearing image of Rajkumar riding a buffalo, singing a popular song in the film Sampattige Saval, brought to the fore the reality of rural India.

While his acting prowess singled him out as a top hero, his voice as a playback singer in Sampathige Saval propelled him into the bracket of an ace singer-actor. The so-far enigmatic voice of Rajkumar forced P B Sreenivas to bid adieu as the actor took over the role of a playback singer as well, even winning a national award as the best singer for the classical rendition of the song Naadamaya ee lokavella in the film Jeevana Chaitra.

From donning diamond-studded crowns and silken robes and commanding armies to playing suave roles akin to an Indian James Bond [Images] in films like Jedara Bale opposite actress Jayanti, Rajkumar soon became an icon, single-handedly delivering box office hits, to the delight of his producers. Having worked with more than 75 directors, his roles have ranged across all genres.

It was his subtle acting, spontaneous style and his flair for giving reel characters real credibility that helped him survive the onslaught of time, age and changing demands of the celluloid world. Despite his box office success, Rajkumar, a strong advocate of Kannada, confined himself to the Kannada film world. A champion of the state language, he had time and again espoused the cause of the mother tongue, taking part in the Gokak agitation in the early 1980s, seeking primacy for Kannada.

His affinity for rural India and Kannadigas transformed him into a larger than life figure, stirring up mass hysteria when forest brigand Veerappan kidnapped him. Veerappan, who ironically hailed from the same birthplace as the thespian, was fully aware of the priceless treasure in his custody when he sent out a list of demands to be met in return for the release of the King of Kannada Films. The release of Rajkumar was nothing short of a state-wide celebration, a time to offer thanksgiving and prayers for the release of one considered a demigod.

Rajkumar's unwavering popularity and paradox of destiny manifested itself when the primary school dropout was conferred an honorary doctorate by Mysore University. The hysteria whipped up by the icon was perceivable with stories of fans worshipping his replicas with milk and honey in Hassan, of those cycling for kilometres to view the first show of his film and of scores going on a rampage when a cinema house put up a board that tickets could not be bought 'for love or money' for the next seven days, doing the rounds in the media on a regular basis.

His felicitation by the Karnataka government on completing 50 years of his film career and the endless bouquets of praise showered him on the occasion suitably commemorated the matinee idol's hold over the Kannada film world. His passing away will not mean just the fading of a star, but the end of an era for five generations, and the loss of the next generation denied the opportunity of witnessing a magnum opus with Rajkumar as the lead.