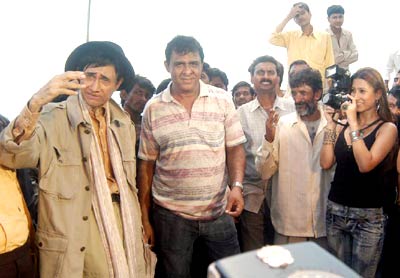 And even after five decades of playing leading man, his love for the arclights hasn't dimmed at all.

In this recent picture, we see Devsaab hard at work, picturising a song sequence for his latest film, Mr Prime Minister.

Obviously, the inimitable actor plays the title role. The film is expected to released by the end of this year, or early 2006. True to his penchant for uniqueness, the title song is a rap tune, sung by Devsaab himself.