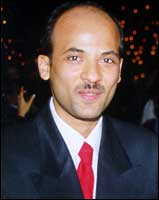 He is known to be the filmmaker who breathed new life into Indian cinema at a time when video piracy and satellite television were set to spell its doom. Full credit goes to Sooraj R Barjatya for instilling in people a refurbished love for cinema with such big hits like Maine Pyar Kiya, Hum Aapke Hain Koun and Hum Saath Saath Hain. Subhash K Jha catches up with the director known as much for his melodious family films as for his reticence.

I am very nervous of the press even now. But I have realised it's important to connect with the audience, let them know what you are making. I am trying to reach out.

What do you think went wrong with your last film Main Prem Ki Deewani Hoon?

A  lot of things. But the first thing that my father said when he saw it was, 'Your theme was that Kareena Kapoor would love Hrithik Roshan [Images] till the end. Then how did she agree to get engaged to Abhishek Bachchan [Images]?' I was talking of pyar ki oonchayaiyaan, rishto ki gehraayiyan and my characters were not living up to that idea. My other protagonists have lived up to certain ideals.

Audiences thought you were going against your cinema in MPKDH and Hrithik was acting like your favourite actor, Salman Khan [Images].

I take full responsibility. I tried to give a certain feel to my characters. The equation worked with Abhishek's character. But something went drastically wrong with Hrithik. Salman played Prem in my first film Maine Pyar Kiya. When I sketched the  character, Salman was very much a part of it. When you start off together you are bound to grow close. 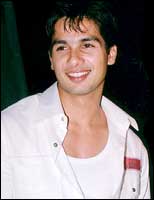 Will you work with him again?

Of course. But it has to be a film and a role that allows both of us to go beyond what we have already done. The best thing about Salman is, he isn't afraid to experiment on screen. After Main Prem Ki Deewani Hoon, I was going through a period of creative uncertainty. I had ideas for five films with Salman. When I narrated them to him, he liked some of them. But all the ideas were in gestation.

I had only concretised Vivah [Images]. It kept haunting me. It had to be made first. My father is very excited about it. I trust his judgement completely. Maine Pyar Kiya, Hum Aapke Hain Koun and Hum Saath-Saath Hain were chosen by my father, Main Prem Ki Deewani Hoon was chosen by me. Now you know why trust my father's judgement (laughs). I told him about the ideas for my next film. He selected Vivah straight away.

You have gone back to the old Rajshri favourite Ravindra Jain to do the music for Vivah.

I believe melody is timeless, the older it is the better. There are so many tunes that I have heard my father and grandfather sing to me. Raviji (Jain) brings that old nostalgic feeling in me. Instinctively I knew he was right for Vivah. The film will have seven songs. There may not be that many dances.

Do you think you can recapture the flavour of Hum Aapke Hain Koun?

No one can do that, not even me. Every project dictates its vision.

Vivah, I intend to look at the sanctity of marital bonding. At 40, I can look at the man-woman relationship with some detachment. Unlike my earlier films, Vivah isn't about the festivities and celebrations connected with a marriage. It's about the definitions and dynamics of a marriage. Once that engagement ring is exchanged, you suddenly become so important to someone else. I feel today's youngsters are losing touch with the beauty and relevance of such a relationship. My film starts with engagement and ends with marriage.

What made you choose Shahid Kapoor [Images] and Amrita Rao [Images]?

From the writer's viewpoint, Vivah is my toughest film. There's nothing beyond the chemistry between the boy from Delhi   and the girl from Mathura to peg the plot on. The film is only about the gradual growth in the couple's relationship. I was very impressed by Shahid and Amrita's performances in their films -- I have seen them all. I buy tickets and watch good films in theatres. It's very important to keep a check on trends.

How will you connect Vivah to younger viewers?

I am going by my instincts. The courtship ritual is something we have gone through. I'm not targeting the film at any specific audience. Today, audiences are educated and aware. They are willing to give any genre a chance as long as the sincerity and sensibility of  the filmmaker shine through. The minute you try to do something that's for the man in Patna or Pune, you are being dishonest. I can't ask my assistants if I'm going right with a shot or a film. Finally I have to take a decision.

Appreciation from the audience is very important. Our last three films taught me the importance of budget -- we spent way too much money in MPKDH. I also realised the importance of the Rajshri dictum -- pyar ki oochaaniyan rishton ki gehraayiyan. These qualities were missing in our recent films. We went wrong in choosing subjects.

Do you think it's tough to go beyond Hum Aapke Hain Koun?

Each of my four films has a part of my life. Some parts connect with the audience, others don't. I can't remake Hum Aapke Hain Koun because that part of my life is over.

Your banner is making regional films?

Our Oriya film has done well. We have just released a Bengali film directed by Prabhat Roy. Next year we will make a Bhojpuri film. Personally, I will focus on Vivah. We hope to release it next Diwali.

Where do you fit in today's  cinema?

After MPKDH, a dude with a bali in his ear came to my office and told me he hated my movie. I asked him to sit down and explain. He told me only films that are high on morality would work under my banner. He enumerated all the films from my grandfather's time. He thought we should always make films that conveyed high principals which the entire family could watch together. Now that we have expanded into television we realise that it's the family audience which makes a soap successful. A family, may not be a joint one, determines a film's fate.

I can't make Murder, but I liked the film. I could see the sincerity of the filmmaker. When Mallika (Sherawat) goes to pick up her son from school, I completely connected with the film. (Mahesh) Bhatt Saab's thought -- every marriage is performed around the fire, but a true test of a successful marriage is the one that goes through fire -- rings in my ears. I can't make a crass film. A filmmaker's attitude depends on the kind of cinema he makes.

What other films have you enjoyed recently?

My favourite film is Veer-Zaara. Black is sensational. I could not connect with Bunty Aur Babli [Images] and Page 3. I don't think I can make such films. I can't bear to sit through the complexities of life in Page 3.

Tabu [Images] keeps telling me to watch Madhur Bhandarkar's Chandni Bar. But I can't bear it. I couldn't watch the little boy in the first half of  Koi�Mil Gaya suffer so much. As a filmmaker, I feel it's my duty to give audiences hope. Even today when I sit through Hrishikesh Mukherjee's films, I feel so happy.