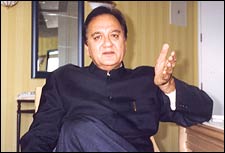 Actor-politician Sunil Dutt touched many people's lives in his 74 years (he would have been 75 on June 6). And journalist Lata Khubchandani is one of those who remembers Mr Dutt very fondly.

She recalls her last interview with Mr Dutt, just a few weeks before his death. He was in a very reminiscent mood:

I came to Mumbai in my teens.

I managed to get a place at Kala Ghoda (south Mumbai) in the Army/Navy building.

I shared a room with eight people, which included tailors, barbers, all sorts of people.

I studied at the Jaihind College (in south Mumbai) and also worked with BEST (the Bombay Electric and Transport Undertaking).

It used to be very hot those days. We would just leave our room and sleep on the pavement. We used to sleep right outside an Irani restaurant.

It used to open at 5.30 am every day -- and that was our wake-up call. As soon as it opened, we would ask for tea. My days started that way, before I left for my early morning classes.

We didn't have much money those days. I could afford only the cheapest fare. I recall two other restaurants that I used to go to. In Dadar, at Khodadad Circle (northcentral Mumbai), there was another Irani caf� which we frequented. Then, there was another at Churchgate station (south Mumbai), where we would sit and eat khari (a crunchy, baked biscuit) and chai.

Where was the money for anything else?

It was difficult to live in the Mumbai of the olden days without the Irani caf�s. Those were the restaurants we frequented. Today's generation goes to 5-star hotels.

I used to be facinated by the waiters who could carry ten to 12 cups of tea and serve everyone at once.

The cups would never fall. Watching this feat was a favourite pastime.

The Irani caf�s have contributed to all of us strugglers. Their wonderful tea, their baked items. I recall the breadrolls we used to eat.

We would sit in groups and discuss our day's events. Our dreams. Those days hold a lot of pleasurable nostalgia for me.

I remember when I visited my village (in Pakistan) again after 50 years. I was invited by then prime minister Nawaz Sharief.

He was very kind when I told him my desire to visit my village. He made all the arrangements for my visit.

My village is called Khurd. It is about 14 miles from Jhelum city, which is on the banks of the Jhelum river.

I have always felt that the people of Pakistan are as affectionate and caring as our own people. You will be surprised (if I told you that) when I went to my village, the entire village gathered to welcome me.

I thought they were doing this because I am an actor and they know me. But it was because they genuinely felt that I belonged there, and that I was coming back for a visit.

The village youth gave me a huge welcome with banners, saying, 'Sunil Dutt, welcome to Khurd!'

My brother's nickname is Soma. They asked about him, my sister Rani and my mother Kulwanti. They remembered all their names. Imagine, after 50 years!

It would be understandable if they did that to me -- am an actor. But my family has not been in the public eye.

For me, it was a really emotional moment. I told them my mother had passed away. 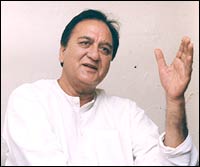 In Punjab, when someone passes away, women beat their chests. When they heard about my mother, they started beating their chests as if someone from their own family had died. Where would one get more sincere emotion than this?

To think that after 50 years, people forget their relatives. These people gave me so much emotion and sentiment. I was deeply touched.

They took me out to the fields. They told me, "Yeh zameen teri hain (this land is yours], Balla.' My name is Balraj. I was called Balla.

They said, 'Nahin, tum yahan aa jao. Tumhein de denge (No, you come here. We will give it to you).'

All this was not lip service. You could sense their sincerity, their genuineness. I am an actor-director. I can read a face and tell whether the person is genuine or not.

There were television channels (present). The villagers were asked why they were giving me so much affection.

They replied, 'It is not because of him. It is because of his forefathers who lived here and gave us so much respect. They were fine people and respected our religion. They were landlords. There is a dargah at the outskirts of our village. When they (Dutt's forefathers) neared the dargah, they would alight from their horses, walk on foot till they went past the dargah, and then get back on their horses. They gave us so much respect. Why wouldn't we respect them?'

My father died when I was just five. We lived in the village without any problem. There were more Muslims than Hindus there.

During Partition, my entire family was saved by a Muslim. His name was Yakub -- a friend of my father's who lived a mile-and-a-half away from our village.

He helped us escape to the main city, Jhelum.

I left Pakistan after I my matriculation.

I never had the chance to visit Lahore [Images]. I visited Karachi when I was invited to attend Benazir Bhutto's [Images] marriage.

I was very keen that my wife (Nargis [Images], who passed away in May 1981) should also see my village, how we went to school. 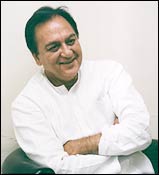 I used to tell her stories about our life there.

In Jhelum, I studied at the DAV School. I travelled to school on horseback all through my middle school years, that is from Class V to Class VIII.

My school was eight miles away, and there was no other conveyance in those days. Being zamindars, we had many horses. One horse was kept specially for me to go to school.

I also remember Rawalpindi, where I studied at DAV School for a year.

There was Murree Road, where my school was. Murree is a hill station. It was called Ko Murree. 'Ko' means mountain. Buses plied from Rawalpindi to Murree.

There was this area called Naya Mohalla, where my relatives were. I would live there with them.

Films were taboo for us in those days. We would just look at the posters.

My wife was keen to go to Pakistan and see all this. Unfortunately, she couldn't.

I really feel this process that has started between our two countries is very positive.

Somehow, this hatred should come to an end. I am a believer of nonviolence. I believe we all are one, whichever religion we belong to.

I wish it culminates in something positive and we can both grow economically. The money we spend on weapons can be used to give water to the people, to educate everybody, to give them medical aid and to give employment to the youth of the country.

If there is no friendship with one's neighbours, no one can progress. Look at Canada [Images] and the USA -- both countries help each other.