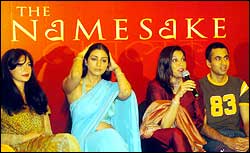 Mira Nair started shooting her new film, The Namesake [Images], in Kolkata on Sunday, May 22. The film is an adaptation of Pulitzer-winning writer Jhumpa Lahiri's debut book of the same name.

"The two-week shooting schedule is tight and we will shoot at several locations in Kolkata, its suburbs and in the districts," says Nair.
The Namesake stars Tabu [Images], Kal Penn (Harold And Kumar Go To White Castle), Irrfan (Maqbool) and Zuliekha Robinson (Hidalgo and The Merchant Of Venice).
"I'm so happy to be back in a city where I have spent 12 summers and a city I have such beautiful memories of," says Nair, who was born in Bhubaneswar, Orissa, but lived her initial years in Kolkata and Delhi.
The crew will shoot for the Bengali-English film in the narrow lanes of northern Kolkata, at Howrah Station and on a train to the university town of Shantiniketan.

The New York leg of the shooting is complete.

Nair says she hopes to start editing in September "after taking a summer break" and complete the film by February 2006 so that it can travel to the Cannes [Images] film festival next May.

The Namesake tells the story of an immigrant Bengali family from Kolkata in New York.

While parents Ashoke (Irrfan) and Ashima (Tabu) long for the family and culture that had enveloped them in India, their son Gogol (played by Kal Penn) is torn between his heritage and finding his own identity.

"The Namesake is the story of the sacrifices our parents have made for their children," Nair explains. "It is a deep human way of telling the story of millions of us who left one home for another, who have known what it means to combine old with the new."

The film will see Lahiri play a cameo as Jhumpa mashi (maternal aunt). Members of the author's family in New York and Kolkata will also feature in the movie.

Nair says she is happy to be in the city of Satyajit Ray and cult Bengali filmmaker Ritwik Ghatak. It "would be a proud day for me -- to be told my films portray the sensibilities of Ray and Ritwik Ghatak," she says.

"I'm such a big fan of these two. I have learnt so much from them. For instance, from Ghatak I've learnt how to shoot a tree. I have big posters of Ritwik Ghatak in my room. They are great inspirers. A film like (Ghatak's) Meghe Dhaka Tara teaches you so much as filmmaker," she adds. 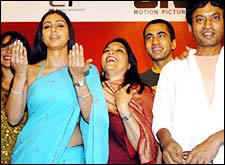 In Kolkata, Nair picked Bengali actors like Tanusree Shankar and Supriya Devi to complete the cast for the The Namesake.

The maker of films like Mississippi Masala, Salaam Bombay and Kamasutra says she chose Lahiri's novel as her next film because she really identified with it.

"It so rightly catches the modern pulse of the South Asian culture in New York. The city's South Asian scene is really pulsating," she says.

The film doesn't depart too much from the book. "I haven't introduced any new characters. One of the changes is that Ashima is a fledgling singer because of my own love for music." she says.

"The film will have baul songs (folk music by roving minstrels of rural Bengal), Rabindra sangeet (Tagore's songs), bhatiali (boatmen's songs) and, of course, the great erudite culture of the Bengalis," she adds.

The $9.6 million film starts and ends with Ashima singing.