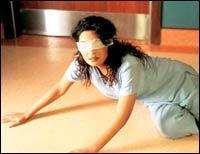 I was -- using the severely understated word -- apprehensive when going to watch Nazar. My knowledge of the film was limited to a few facts: It's another film from the Bhatts; It stars Pakistani actress Meera and features a kissing scene, now edited out, which created much controversy; It also stars Ashmit Patel [Images]. None of these encouraging signs.

I settled into my seat armed with ample popcorn to bury my face in.

The film starts with an item song, and grimacing is inevitable. At this point, 25 seconds since the censor certificate flashed 'A' across the screen, one is already looking at the wristwatch and wishing the torture ends soon. Thankfully, it does. Meera's beachfront gyrations are part of a music video being shot, and, having wrapped up by late night, she decides to drive back to Mumbai. Alone, despite her gay video director's protests.

Driving through dark and winding forest roads, she thinks merry thoughts -- like when she bawled as a kid while her folks perished in a car crash. Suddenly, smack in the middle of the way lies a red-clad corpse. Meera swerves to save herself.

From this point, we're subjected to her dreadful visions involving blood, bodies and blades, usually curvy. The woman lives by herself, but next to a comfortingly obese aunt, who can mostly be counted upon to dispense a helpful hug.

Bollywood today, thanks to Ram Gopal Varma's Factory, has well learnt the use of audio in stimulating horror. So, without finesse of any kind, Nazar hammers sounds at you. Here, the sounds are clich�s -- wailing banshees, footsteps, snatches of sinister laugher -- but they are effective enough to inspire the occasional recoil in one's seat.

The plot is reminiscent of the Madhuri Dixit [Images] film, 100 Days. There's a killer on the loose, and the chick has extra sensory perception. Here, Ashmit Patel is the miscast cop, and sympathetically hears Meera through, as opposed to his hardboiled partner, pintsized policewoman Koel Purie.

But the serial killer must be caught, for this desi Jack the Ripper -- with a Maharashtra government-like enthusiasm -- is clamping down rather severely on bargirls -- slicing veins and arteries with abandon.

The suspects are introduced -- there's a seedy uncle who suspiciously hangs around in the same dance bars, and drunkenly lurches behind the victims; a doctor who can't seem to get enough of his leather gloves; and a serial killer with a very similar style, who has now vanished from prison.

In typical potboiler fashion, incriminating evidence swivels alternately across all three, and the audience is admirably left guessing which of them is too obvious to be the killer.

In the second half, the film loses steam with a grinding thud. Meera is dragged by her aunt to see a mystic woman -- qawalli obviously tossed in at this point -- who waxes oracular and tells her to face her fears.

The supernatural film standards then flow fast and loose, interrupted but briefly by a song sequence featuring an under-waterfall and immensely clingy Meera, conveniently explained as Ashmit Patel's (wet?) dream. The controversial kiss is edited out, yes, but little is left to the imagination during their rain-drenched embraces.

Meera does well in the film, a decent actress coping strongly with the material she has been given. She comes across as quite convincing, even as her hero's as imbecilic as they get. Ashmit Patel continues to douse his lines with overacting and makes his 'incisive cop' character impossible to take seriously.

The scary moments in Nazar stop overwhelming in a bit, as her visions increasingly resemble tuning into a fuzzy-around-the-edges television station.

With the plot an amalgamation of a half-dozen unnecessary to identify DVDs, the writer has worked hard at effecting several last-minute dramatic twists. The problem, however, is that you manage to -- due to the direction being anything but taut -- see the plot's kinks coming a few minutes before they actually do. Hence, yawn. Their unpredictability is largely owing to their sheer ludicrousness. You can tolerably skim over plotholes dealing with realism, but the final motive of the killer for slashing up bargirls is groan-provokingly awful.

In sum, Nazar is not really a bad film; it just tries too hard to be good.