The clock strikes doom. The year is 1986. Two lives from two different continents are never going to be the same again.

A five-year-old girl sits blissfully unaware in the backseat of her family's car enjoying a drive with her parents on the streets of London [Images]. The car meets with an accident. The kid loses her parents and her eyesight.

A heavily tattooed village woman of Bhuj in Gujarat, India, delivers a caesarean baby on the night of a lunar eclipse. Soaked in blood, the baby is a horrifying sight. She is declared dead. But then, she opens her eyes to live on.

That's how Naina begins. Two scenes later, however, it becomes a tacky scene-to-scene reproduction of the Chinese supernatural hit, Jian Gui aka The Eye. The Eye, too, was said to bear resemblance to M Night Shyamalan's mindboggling The Sixth Sense.

I happened to see The Eye a few months ago, and its eerie memory still terrifies me. So, I was hoping the remake would be engaging.

For one, it's got Urmila Matondkar. She is to horror what Shah Rukh Khan [Images] is to romance. We all know how reliable Urmila's capabilities are in freaking or getting freaked. She doesn't disappoint this time either. This genre appears to be getting to her though. The talented actress looks unmistakably worn-out throughout the film.

Second, Naina doesn't have a single song. At 12 reels, it looked inviting.

Anyway, to all those who are clueless about The Eye, here is what happens:

Twenty years later we are introduced to Naina Shah (Urmila), a blind young woman who we are told nothing about. Except that she lives in suburban London with her garrulous granny (a painfully over-the-top Kamini Khanna). 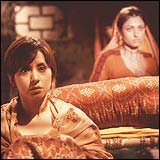 Naina undergoes a successful cornea transplant but all is not light and colours. The world of sight welcomes her with its share of shadows and spirits.

With every passing day, Naina discovers her newfound clairvoyance where she can sense death before its arrival and experience the misery of the restless dead.

On screen, this translates into apparitions wearing layers of talcum powder taking Spiderman-esque dives and disinterested surgeons scooping intestinal organs out of ketchup drenched corpses on stretchers and lifting their heads in Naina's welcome. If that wasn't enough, this gory spectacle is frozen on camera to add to the nauseated viewer's plight. Naina doesn't puke but many others in the theatre volunteer.

In The Eye, there's a little boy who surreptitiously makes appearances at the heroine's door. In Naina, it is a pale-faced girl who makes a spooky statement in her striking yellow raincoat.

The entire girl-in-a-raincoat sub-plot is conveniently borrowed from Hideo Nakata's Japanese horror, Honogurai Mizu No Soko Kara, aka Dark Water. [If you care for trivia, Dark Water's official Hollywood remake -- featuring Oscar Winner Jennifer Connelly [Images] -- of the same name is ready to hit the US screens on July 8.] 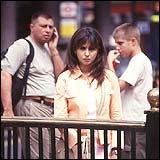 Involuntary witness to a series of cornea-popping episodes, Naina wants to solve the wicked mystery behind her eyes for once and all. The search directs her to the above-mentioned Scene 2, namely Khemi (Shweta Konnur) and the inevitable end.

The Eye and Dark Water were creepy, yes. But they were very moving too. You felt the character's dilemma and her pursuit for answers from the unknown. Naina fails to establish an emotional connection. Debutant director Shripal Morakhia tries hard to frighten by employing crude methods like charred bodies and painted faces. But gore is a poor substitute for psychological terror.

There is something spiritual about the way horror is conceived in Japanese, Korean and Chinese films. The idea is to trick the mind and play on fear. At the same time, they maintain an aura of mystery that is eternally unsolved. Horror should never answer the question it raises.

Instead of reflecting this ambiguity, Naina goes on a melodrama spree and ruins the fear factor. The same thing happened with Vaastu Shastra [Images] � a medley of Korea's Acacia and Japan's [Images] Ju-on: The Grudge. What could have been spine chilling turned into outright hilarious.

It is cool to remake Southeast Asian chill flicks. Hollywood is making big bucks doing that. But unless the original's subtle uncanniness is retained, it just doesn't work.