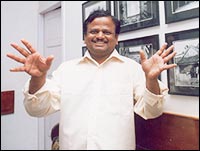 After watching directors give instructions from behind the camera, cinematographers sometimes get the urge to make their own films. And almost all of them have been successful in their directorial attempts.

Anand started his career as a photo journalist for India Today, Illustrated Weekly, Aside, and several other magazines. Rejection by a national weekly made him go to P C Sreeram with his pictures. In no time, he got the job of an assistant.

When Priyadashan invited Sreeram to shoot his Thenmavin Kombath, Sreeram suggested Anand's name, and the rest is history. Anand won the National Award for Thenmavin Kombath. He shot another Malayalam film, Minnaram, once again for Priyadarshan [Images].

Anand's first Tamil film was Kadal Desam, starring Tabu [Images], Abbas and Vineeth. It was because of this film that he got his first Hindi film, Mansoor Khan's Josh.

Another major film of Anand's was Shankar's Mudalvan which was later remade in Hindi as Nayak. Anand was also the cinematographer of Rajkumar Santoshi's The Legend Of Bhagat Singh which he chose when Santoshi offered it along with Lajja and China Gate.

Anand's first directorial venture, Kana Kandein, has hit theatres. He spoke to Shobha Warrier about the film, which is a far cry from the average Tamil fare.

I have worked with talented directors like Priyadarshan, Shankar, Vasanth, Rajkumar Santoshi and Mansoor Khan and I have found that all of them believe in strong scripts. I learnt a lot of things from all the directors I've worked with, including first time directors like Susie Ganesan (Virumbukiren) and Gandhi Krishna (Chellamey).

I began discussions with Suba about how one could proceed along that line.

Initially, A M Ratnam was to produce the film, but it got delayed. In six minutes, Thenappan took the decision to produce the film. That very evening, he gave the advance to all the three artistes -- Srikanth, Prithviraj and Gopika.

I must tell you Kana Kandein is a commercial film in the sense that it has five songs and three fights but every one of these commercial elements has its groundings in logic. I was very particular that my film should be logical.

These days, you can't make a commercial film without songs because audio and songs are good marketing tools. We get a lot of publicity when television channels play the songs.

The film is about three people who are about 27 to 30 years of age. The hero, Bhaskar (Srikanth) a PhD scholar, is an idealist who wants to do something for the country and the people. Madan (Prithviraj) is a businessman who believes in using others for his success. The film is about what happens when these two meet.

Gopika is the heroine, but there is no love triangle in the film.

I also wanted a girl who is educated and has a homely look. The first one who came to mind was Meera Jasmine's [Images] but she could not give me dates. Gopika's face came to mind because I had seen her film Autograph.

For Madan's role, I wanted someone who had the sophistication of Arvind Swamy. I spoke to a lot of Tamil heroes but all of them wanted the hero's role -- for which I only wanted Srikanth.

It was when I saw Swapnakoodu that I thought, why not Prithivaraj? He had no problem in doing a negative character. In fact, he said he was lucky to have got the chance to play such a character. I must say he has done a fantastic job. Word has spread about his performance and he is getting a lot of Tamil offers.

My assistant Soundararajan did the cinematography because I can't work as a director and cinematographer at the same time.

Everyone who saw the rushes told me it is a good film but when I see the film, I feel I could have done better!

I am a cinematographer, and I will continue to work as one. But I want to direct films whenever I get a good script.