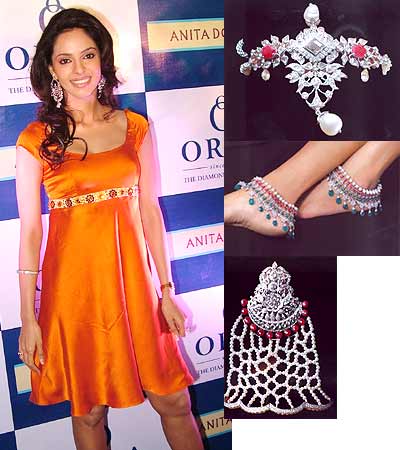 Guess how much Mallika Sherawat's [Images] diamonds, which she will wear at the Cannes [Images] Film Festival, costs?

"Yes!" confirms Mallika. "I am truly going like a princess at Cannes."

The actress is heading to France [Images] for the premiere for her first international film, The Myth, opposite Jackie Chan [Images]. And she plays a princess in the film as well.

After Aishwarya Rai [Images] faced flak from reputed dress designers for the outfits that she wore at Cannes for the last two years, Mallika does not want to take any chances.

Ask her about it, and she'll answer diplomatically, "I cannot comment on anybody else but I believe that whatever I do, I will do it best. I am going to be extremely careful about what I wear. I am going to be exposed to the international media, so I have to look top class!"

"I am grateful to Jackie Chan who spotted my talent and gave me this opportunity," adds Mallika.

ORRA Diamonds offered her the jewellery (above) for the premiere on May 17.

"There are nine sets that have been chosen from the ORRA eternity collection which was specially designed for this occasion. The pieces are designed in keeping with the clothes I will be wearing. There are heavy diamond studded necklaces, bracelets and earring, with precious stones like rubies, emeralds and pearls," says Mallika.

Mallika is apologetic because she could not give the Indian media a sneak preview of her Cannes outfits. "I got a call from Jackie Chan's office and they told me I should not showcase my clothes to the Indian media at this time."

Vijay Jain, Chief Executive Officer of ORRA, said that the offer to Mallika happened over a friendly telephonic chat with the actress and that she was not a brand ambassador of their product.

But won't she need a bodyguard since she will be wearing such expensive jewellery? Mallika quips, "I have the world's best Kung Fu expert Jackie Chan with me at Cannes. So why do I need anyone to protect me? I'll be safe."