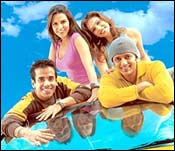 Kool isn't for everybody. And neither is Sangeeth Sivan's new film, titled with enough Ks to keep the head honchos of Balaji Telefilms [Get Quote] quite, I daresay, kontent. The film has been promoted as 'a Masti kind of movie', which isn't saying too much.

But then, it isn't trying to. The new film is expectedly juvenile, puerile, over-the-top, loaded with entendres so singular in meaning it's a shame to call them double, and, all in all, anything but subtle.

Which is fine, because that, again, is what this genre is trying to be: a not-quite 'family' comedy, a bawdy affair with skimpily dressed women to make up for the lack of plot, and something basically college kids will enjoy laughing at, despite simultaneously raising a condescending eyebrow or two. Not to mention ample nudge-nudge-wink-wink moments.

But that was Masti, and this, well, is not.

The film starts off well, establishing Tusshar and Ritesh as a couple of wannabes trying their best to fit in, establish their own groove, meet women and somehow get rich as quick as possible. Obviously, work isn't really a part of their vocabulary as they mooch through life in every manner, ducking landlords, running from bouncers and picking up several convenient alter egos in the course of an evening. Nothing very original, but 'fun' nevertheless.

When we first meet these lads, we like them tolerably enough. As a bunch of other characters are thrown into the increasingly insane mix, we slowly begin to long for scenes like we saw at the start, where Ritesh coolly riffs off his straight-man Tusshar. They have pretty good chemistry, and go reasonably well together. But then comes that most unnecessary -- in this case -- ingredient for a risqu� comedy -- a plot -- and it throws everything awry .

And what an absolute ripper of a plot it is -- the scriptwriters tossing in a transvestite (Bobby Darling, who else?), an eccentric sex-crazed psychiatrist (Anupam Kher [Images]), a serial killer, hapless policemen, bandits in Osama and Bush masks, and most every comedy clich� you can come up with. The film sadly turns from (the very initial) frothy to frown-worthy. Too many inane characters spoil the broth, which was an insubstantial stew to begin with. With the compulsory droplets of emotion and melodrama, the film, after the first one-fourth, is essentially ruined. 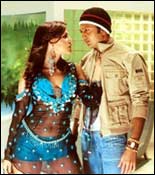 Ritesh Deshmukh [Images], with all due credit, is the best thing in Kya Kool Hai Hum. The Masti dork here plays the know-it-all who optimistically wants the world to call him 'dude'. Predictably, he strikes out constantly, but his scenes are worked with considerable �lan, enough for us to say the fellow has a Bollywood future.

Then again, it'd help if he worked in a film where his role isn't whittled cruelly down to a decidedly second lead because the producers want their kid to shine.

Unfortunately, the said kid doesn't. Tusshar Kapoor might be one of the most likeable actors on screen today, by sheer dint of his diligence and earnestness, but he can't carry a film as a leading man. When he mouths words of romance, you're advised to bury your face deep in popcorn, and hope it ceases fast. The two guys, as mentioned, do well together, with a few punchline-filled scenes managing to work smoothly, but they aren't given enough screen-time together. Other characters need room to be introduced, you see.

Then, there are the women.

Now, Isha Koppikar [Images] isn't, by any stretch of a benevolent imagination, an 'actress' but, in this film, she is comparatively better than Neha. Not that this is a great benchmark, given that the Dhupia woman -- she's playing a doctor? Of course! Can't you see she's wearing glasses in her first two scenes? -- has less time on-screen than the stammering laundry man, the euphemistically named Popat.

Back to Isha, here we meet her in policewoman garb, complete with betel nut and barbell, a tough khaki nut opposed to all men. Yawn -- Hema Malini [Images] she ain't! Koppikar puts on a harsh Marathi tone, but once in love with the murder suspect, both her accent and attitude conveniently melt away.

Then again, this isn't a movie which requires the word Anupam Kher's Dr Screwwallah repeatedly emphasises -- 'logic'. We aren't meant to think about the implausibility in every single frame of the film; we are meant to willingly suspend cynicism and laugh.

Kya Kool... does have moments where we grin, and there are a few wittily written and surprisingly sharp lines. And then there are the bits Ritesh pulls off by himself. Unfortunately, there aren't enough of these situations, and we spend more time groaning than actually laughing.

Kya Kool Hai Hum starts well, sags in the middle, and ends on a surprisingly spry high -- which would be acceptable enough, if only the flabby middle wasn't two hours and 40 minutes long.