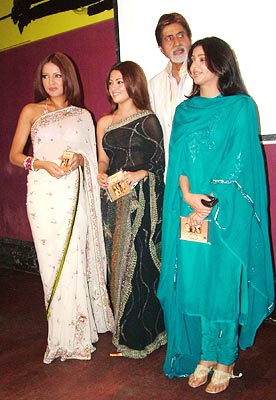 The film boasts of an ensemble cast, including Tabu [Images], Rahul Bose [Images], Bhumika Chawla, Riya Sen [Images], Celina Jaitley [Images] and Jimmy Shergill [Images], but when you title your film Silsilay, what better way to kick off the proceedings than by getting the original Silsila man himself?

So Khalid wisely roped in the always newsworthy Amitabh Bachchan [Images] as the chief guest for the evening and he, along with several other wellwishers showed up, easily stealing the spotlight from the not-so-glamorous cast.

The high point of the evening was when the compere forgot Riya Sen's name, referring to her as Reema first, then Reshma Sen. The Big B [Images] yelled out, "wrong name!" in his trademark baritone, but the compere was still hapless. Poor man must be understandably confused by the sudden overflow of Sen heroines in Bollywood today!