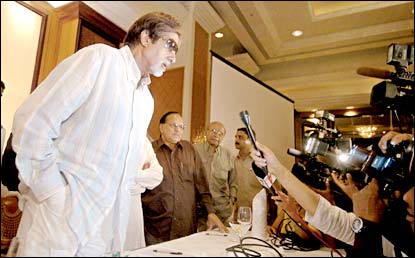 After playing a teacher to a blind girl in Sanjay Leela Bhansali's [Images] Black, Amitabh Bachchan [Images] will be seen as a blind lawyer in S Ramanathan's Zamaanat. Incidentally, Ramanathan made the 1972 film Bombay to Goa [Images], starring Amitabh, Mehmood, Shatrughan Sinha and Aruna Irani.

"The film (Zamaanat) has me playing the role of a lawyer for the first time," Bachchan says. "I play a blind advocate who seeks justice for an innocent man facing charges of murder."

The film has taken over seven years to be made, but the Big B [Images] says the delay will not hamper the film's prospects.

Ramanathan says Zamaanat was delayed due to certain problems including a distributor's demand for dropping one of the actors from the film. "I refused to do so," he says, adding that the exact date of the film's release will be decided later.