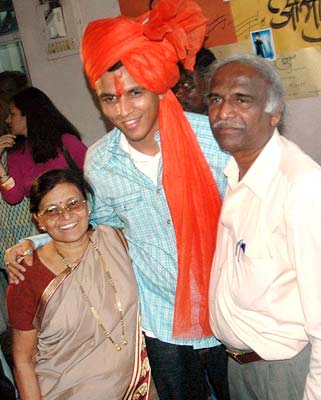 A large number of people gathered at Shahu Nagar in Dharavi, northcentral Mumbai, to welcome their hero. Abhijeet, who used to sing at the Ganesh and other festivals in Shahu Nagar, has made his area famous.

Abhijeet met his parents (seen in the picture), friends, relatives and neighbours, and stayed home for about three hours.

The police had a tough time controlling the crowds. Abhijeet was escorted by private security guards.

The young talent is now busy with recording an album promoted by Sony Entertainment Television. A few songs have already been recorded.

Before he went home, Abhijeet met up with Mumbai Mayor Datta Dalvi and his family.